the agony of defeat 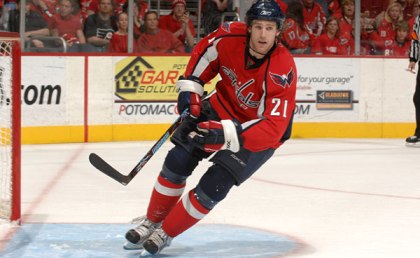 The Washington Capitals’ penalty kill has caused lots of heartache and pain this season, but not quite like this.

Last night, during the Caps’ 5-4 loss at home to the L.A. Kings, the team gave up a powerplay goal for the 13th consecutive game, which is believed to a franchise record. As if that wasn’t bad enough, forward Brooks Laich was injured with roughly seven minutes left in the second period while blocking a shot with his calf during a penalty kill. After absorbing a slapshot from the point Laich dropped to the ice, clearly favoring his leg. Once the play was stopped Laich was finally able to get up and labored over to the bench. Here’s how Brooks saw it:

“We were down shorthanded, and [defenseman] Shaone Morrisonn came out of the box,” Laich said. “But they still had possession of the puck and the guy was walking in to basically tee one up. As a player you know the situation you’re in and you know you have to block it. As penalty killers that’s what we get put out there to do. Just took it in a very bad area. I think so, to date, that’s the worst one I’ve taken. It was just very painful and I was able to finish the game. Popped a couple pain killers and tried to suck it up and was able to finish the game, but I’m pretty sore right now.”

What went through your mind when it happened?

“Well as soon as I got hit I knew it was trouble,” he said. “Jose [Theodore] luckily covered the puck 10-15 seconds later and then I just got off the ice and my usual routine is to come to the back and try to walk it off and try to get some feeling back in the leg. Each one is different. I’ve been through a lot of them, but each one is different. You can get hit in different spots and sometimes you can hit a nerve, sometimes it’s a bone, sometimes it’s muscular. You never really know, so I just come back and mostly try to regroup mentally. The first thing you have to do is just accept the fact that the rest of the night is not going to be really any fun.”

A few minutes later you got back on the ice, but your first shift back was only about 15 seconds. Were you still trying to sort everything out?

“Yeah, I told Dino, our assistant coach, to have somebody ready just in case,” Laich said. “I don’t know if when I step on the ice I’ve broken anything. I never had it X-Rayed or anything at that point in time, I just wanted to keep playing.

“I realized that I wasn’t going to be flying around the ice the rest of the night. It wasn’t going to be a skating night, which is usually my game,” he said. “I had to try and slow things down and be more aware of who was on the ice, making plays and being patient with the puck. Try and beat people that way rather than trying to beat them with speed.”

The last two minutes were as exciting as hockey can get. Did you get a piece of that puck on the final goal?

“Yeah, I didn’t tip it a whole lot, I just got enough of it to get it into the net,” Laich said. “I just changed a little of the direction on the goalie. I don’t think he really saw it to begin with, but my mobility was pretty limited. Usually I’m around the net anyways, so if you can’t skate why not just plant yourself right there? Greenie makes a great shot and I was able to get it into the net and tip it past him.

“We kept applying pressure,” he said. “I saw a lot of people leaving the arena as soon as they scored their fifth goal. They thought it was over. I think we’ve proved to our fans, and especially to ourselves, that no game is ever over. We had chances. I had another chance with about 20 seconds left that just about went in the net. Unfortunately tonight it didn’t go, but we’re going to bounce back Saturday.”

Were you aiming five hole on that last shot?

“I was just trying to get it on net,” he said. “There was a scrum in front – a couple of their guys there and myself there. I originally tipped the puck, stopped it and thought maybe the goalie would be out of position a little bit. I tried to get a quick shot off and ended up hitting his blocker, I think. It was an exciting finish for the fans, I guess, but not the result we wanted.”

And with that we let Laich go get some rest. The Capitals may continue to struggle at times on the penalty kill, but it’s not for lack of effort. Guys like Brooks are busting their tails and literally sacrificing their bodies to try and turn this thing around.

Recaps of last night’s game won’t even mention the blocked shot, but Laich will definitely remember it for a while. Now if we can just convince some of his teammates to stop taking ill-advised penalties, maybe we can limit the abuse on Laich and the rest of the penalty killers.