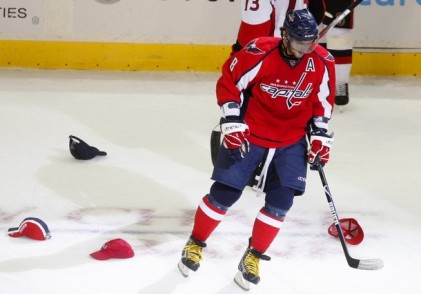 Some folks might try to tell you differently, but know this – the undisputed MVP of Super Bowl Sunday was clearly Washington Capitals left wing Alex Ovechkin.

(Quick sidenote: Can someone please explain to us why people are all excited about the Pittsburgh Steelers? They beat the Arizona Cardinals. Big deal. Who hasn’t?)

A day after scoring two goals to defeat the Detroit Red Wings (you know, the defending Stanley Cup champions) 4-2, Ovechkin followed it up with a hat trick in a 7-4 victory over the Ottawa Senators. Five goals in one weekend is pretty outstanding, even for Ovechkin. For those scoring at home, he’s now got 36 goals and 29 assists for 65 points on the year.

Ovechkin now has 199 career goals in just four seasons (do the math, that’s pretty good) and continues to entertain the world each and every day he takes the ice. Don’t take our word for it.

“The most amazing thing about Ovie is, I’ve played with Alex now for four years, and he makes such a great effort to get it up to there,” said Capitals forward Brooks Laich. “Then, the next game he can come out and take it higher. And after that he can take it higher. He never gets satisfied. Last year he scored 65 goals and won all the trophies, but he wants to do more. He wants our team to do more. He wants to win more. That’s the amazing thing about Alex, he’s never satisfied. He keeps trying to get better.”

The only people who aren’t thrilled to see Ovechkin lighting the lamp (besides the opposition) would be the cleanup crew who has to pick up the hats from the ice on days like Sunday. He scores so often, they quit. And since the Capitals are the only team in the NHL with ice girls who don’t actually skate, that left Ovechkin, as pictured above, to clean up after his seventh career hat trick. Somehow we don’t think he minds.