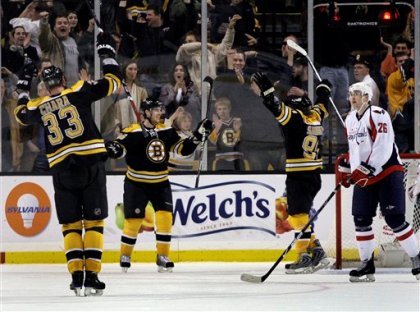 If you missed the Washington Capitals 3-2 loss to the Boston Bruins last night, fear not. Chances are if you’ve been following the team this season, you can guess how the loss played out.

At times, the Caps easily outplayed their opponent, in this case the Bruins who have the NHL’s best record. Unfortunately, there were other times when the opponent didn’t matter as the Capitals did their best to shoot themselves in the foot.

For the ninth-straight time, the Caps allowed a powerplay goal. That, more than anything, is the reason the Caps left Boston without the win. Center Michael Nylander might have scored a goal (no small feat for the man nicknamed “healthy scratch” this season), but he also took a bad penalty which the Bruins scored the game tying goal on.

And while his penalty wasn’t the one that ultimately doomed the Capitals, forward Alexander Semin once again took an ill-advised penalty in the third period of a tightly-contested game. For those who missed it, Semin was whistled for cross checking with just over six minutes remaining in regulation. If not for stellar goaltending by Caps goalie Jose Theodore during Semin’s penalty, the game wouldn’t have even made it to overtime.

Don’t forget that the last time we saw the Caps in action before the All-Star break, Semin was called for tripping Ottawa Senators captain Daniel Alfredsson with just over three minutes remaining in the game. The Senators won that game 3-2 after capitalizing on Semin’s blunder.

At this point, you wonder how tough it is for coach Bruce Boudreau to trust Semin on the ice when the game is on the line. While he’s got as much skill as any player in the league, his immaturity and poor decision making is something that will only become more of an issue until something is done.

Behind closed doors Boudreau needs to pull Semin aside and inform him that his foolish third-period penalties will no longer be tolerated. Boudreau spoke during his acceptance speech after his induction into the AHL’s Hall of Fame this past weekend about the NHL’s front office threatening to fine him $10,000 if he bad-mouthed an official in public again. Well, by Boudreau’s own admission, the message was clearly sent and he no longer speaks about officiating in his post-game press conferences.

So Bruce, why not use your own life experiences to teach others? Pull Semin aside and inform him that every penalty minute he gets in the third period is going to cost him a thousand bucks. Hit him in the wallet until the message is received once and for all.

Obviously the Capitals are a better team with Semin than without, but they could be even more dangerous if someone could get through to the talented winger that his penalties are hurting the team and could ultimately end up keeping this team from achieving greatness.

The Capitals’ 24th ranked penalty-killing unit isn’t going to get better overnight, but the best way to minimize the unit’s effect on games is to limit the amount of times they’re called upon. The first step in making that a reality is to hold your players accountable for their actions. That should start with Alexander Semin.