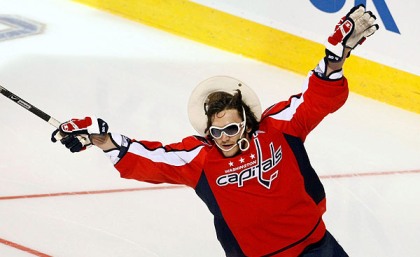 Sure, he might not have been named the most valueable player of the NHL’s All Star game, but it was still a pretty sweet weekend for Washington Capitals left wing Alex Ovechkin.

The fun started with Ovechkin and friend-turned-enemy-turned friend again Evgeni Malkin of the Pittsburgh Penguins kissing and making up, with a large assist from Ilya Kovalchuk. Then, Ovechkin successfully defended his Breakaway Challenge during the NHL’s skills competition Saturday night. As you can see from the above photo, Ovechkin was in rare form.

Unlike voting for the All Star game starting lineup, Ovechkin caught the attention of hockey fans  with his shenanigans and captured more than 42 percent of votes. And so what if he didn’t start the All Star game. He was definitely the biggest attraction during the game itself. Ovechkin scored the East’s first goal of the night and scored the game clincher during the shootout. In between he picked up two assists and became the Capitals’ franchise leader for All Star game points (surpassing Peter Bondra).

Oh, and Ovechkin also involved in the best off-ice moment of the weekend too. From Tarik El-Bashir:

Late in the second period, the JumboTron over center ice showed two young women holding beers and dancing to the beat during a break in the action. The camera then cut to Ovechkin, who was watching the girls on the screen and was saying, “Oooooooh.”

Of course, all 21,273 fans in the building cracked up with laughter. Ovechkin, too, let out a hearty chuckle.

“They were dancing pretty well, and I said, ‘Wow!'” Ovechkin told me moments ago. “I don’t think the camera was going to look straight at me.”

It’s no wonder some are calling Ovechkin the NHL’s rock star.

The only lowlight from the weekend was Boston Bruins defenseman Zdeno Chara breaking the 16-year-old record of the immortal Al “Wild Thing” Iafrate during the hardest shot competition. The former Capital’s record of 105.2 miles per hour was eclipsed by Chara’s 105.4 mph offering (and yes, we know he wasn’t on the Caps when he set the record, but we don’t care).

So please excuse the tear streaming down our cheek. We’re not crying. We’re just making a lasagna … for one.