life of a grinder 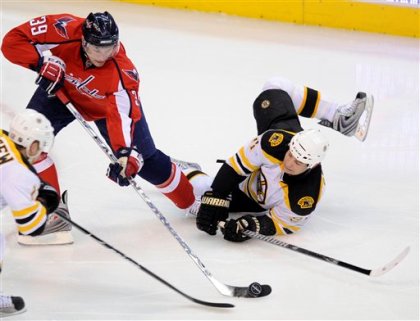 Please forgive center David Steckel for being a healthy scratch when the Washington Capitals traveled to Long Island to face the New York Islanders for a Monday matinee. If anyone on the team deserved a day off, it’s probably Steckel.

When we caught up with the former Ohio State Buckeye Saturday night after the Caps defeated the Boston Bruins 2-1 we couldn’t help but notice two things – first, he was carrying the hard hat for his workmanlike effort against the NHL’s best team and second, his face was swollen and bloody as if he’d back-talked Donald Brashear or something. We figured we should pull him aside and get some answers.

Did we see you rocking some new headgear earlier?

“Yep, you get your lip cut apparently you get the hard hat,” Steckel said in the locker room after the game.

Since you brought it up, what happened to your face, man?

“At the end of the first [period] when I was taking that pass up the middle, guys yelled heads up, but I had to take the hit to make the play,” he said. “I’ll take it any time.”

You knew the hit was coming and made the play for the puck anyways?

“It was either that or the puck could end up in the back of our net in the last 30 seconds of the period,” Steckel said. “I’d rather have it the way I did.”

Isn’t there an easier way to earn the hard hat?

(Laughs). “There is, but as you can tell from the stats I’m not really the goal scorer,” he said. “I’ve got to get it done off the stat sheet.”

The Boston Bruins have the league’s best record, and yet you guys are now 2-0 against them. What are you able to do that no one else is against them?

“That’s a good question,” Steckel said. “You know, I haven’t seen many games that they’ve played, but for us it’s a matter of being patient. In the past we’ve been really frustrated after the first period when we go out against a team and take 20 shots and don’t score. And Boston, defensively, is the best team in the league, so you’re not going to get chance after chance like other teams. We had to make sure we went in to this game with a good mental toughness and be opportunistic.”

If you look at the Caps’ record against the league’s elite and against the lesser squads (like, say, the New York Islanders) it looks like you guys have a habit of playing to the level of your opponent, right?

“We’d like to think it isn’t, but if you see us play against those teams, obviously we don’t come out with the same intensity,” he said. “Obviously that’s one thing we need to learn. We’ve learned quite a few lessons already, but we need to make sure we don’t keep learning them throughout the year. Come playoff time, we’re not going to be able to pull that kind of stuff.”

While the Caps were able to squeak out a 2-1 overtime victory against the Islanders yesterday, it was clearly a game in which the Capitals thought they could just show up and the lesser teams would happily roll over.

Maybe it was because Steckel was out of the lineup and couldn’t lead by example (and with his face) once again, but getting the same intensity night in and night out against both the best and worst the league has to offer should be priority number one for Bruce Boudreau and the coaching staff for the second half of the season. Or at the very least they should find more ice time for selfless players like Steckel, who do whatever it takes to get the job done. Even if it means eating lunch through a straw for a couple days afterwards.