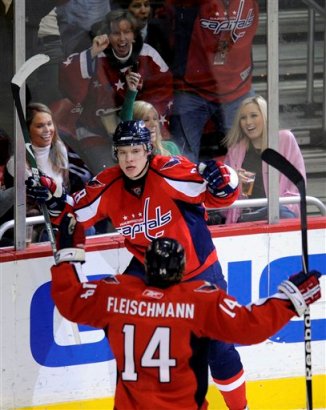 This was a landmark weekend for our nation’s capital as countless Washingtonians clad in their red, white and blue converged downtown for the chance to be a part of something special.

While nothing was guaranteed, countless locals flocked to D.C. on the off chance that this was the dawn of a new day. After all, no one wanted to look back with regret having missed a chance to be a part of history as the top two teams in the Eastern Conference squared off when the Boston Bruins battled the Washington Capitals.

What did you think we were talking about – some Beyonce performance?

The Bruins rolled into town with the NHL’s best record (33-7-4) and an impressive eight-game road winning streak but knew they’d be in for street fight – especially since one of those seven regulation losses came the last time they visited the Verizon Center. And for the record, there was zero chance Boston was going to overlook their opponent on this night because that 3-1 loss on Dec. 10 was their only loss the entire month (they went 12-1 in December).

That’s why this contest definitely had the look and feel of a playoff game. The first period remained scoreless as both teams seemed, for the most part, content to play it safe and not take too many chances.

Bruins center Marc Savard struck first early in the second period, but defenseman Mike Green and the Caps responded just over a minute later when the talented defenseman scored his 12th goal (his 10th powerplay goal) of the season. Green’s goal was huge because the Caps haven’t fared well when allowing the first goal this season. In fact, they came into the game an impressive 20-4-1 when scoring first, but just 8-10-2 when their opponent scores first.

After those two goals, both teams seemed to step up their intensity. There was even more physical play and both offenses began to take more chances, which translated into more odd-man rushes and quality-scoring chances. This regular-season game suddenly resembled a championship boxing match, with two prize fighters trading blows waiting for the other to blink first. You got the sense that whichever team struck next would leave the building with the victory.

On a roster loaded with as much offensive firepower as any team in the league, the biggest play of the night came from an unlikely source.

Thanks to a Capitals turnover, Martin St. Pierre and the Bruins had a breakaway late in the third period. Just when it looked like an easy goal for Boston, defenseman Milan Jurcina hit the deck to break up the play before St. Pierre could do anything with the puck. Caps forward Alexander Semin gained control of the puck and took off in the other direction, where he blasted a slap shot past Tim Thomas for the eventual game winner with eight minutes remaining in regulation.

Semin’s goal was officially listed as unassisted, but that goal never happens if Jurcina doesn’t make his selfless play on the other end.

“It was a key play in the third period because the guy had a scoring chance and it would be 2-1 for them and we would have to catch them,” said forward Tomas Fleischmann. “I think it was a great play by Juicy and Sasha had a great shot.”

Defenseman John Erskine took it one step further, saying that if it were up to him, Jurcina should have been credited for setting up the play.

“Juice made an unbelievable play there,” Erskine said. “In my opinion, he should have gotten the assist there because he pretty much set up the goal for Semin and got the win for us.”

While the rest of the league struggles to slow down these powerhouse Bruins, the Caps are now 2-0 on the season against Boston, thanks largely to unselfish plays by lesser known guys like Jurcina. It might not show up in the newspaper the next day, but the guys in the locker room know it and appreciate just how vital that kind of attitude is if this team is going to get past championship contenders like the Bruins come playoff time.