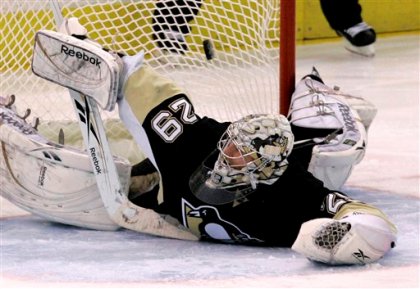 That’s what coach Bruce Boudreau said to the media after the Washington Capitals lackluster performance during a 5-2 loss to the Edmonton Oilers at home Tuesday night. Because the Caps played the following night in Pittsburgh, Boudreau couldn’t take out his frustrations on his players with a grueling practice Wednesday morning. So the Capitals coach had to come up with another way to send his players the message.

He did so Wednesday night when, just before game time, it was announced that the Caps’ captain Chris Clark was being benched as a healthy scratch. His message was brutally clear – if the captain can sit, then so can anyone else who isn’t getting it done. Did his players get the hint?

A convincing 6-3 victory over the rival Pittsburgh Penguins seems to indicate the message was received loud and clear. While the Caps got off to a sluggish start, facing a five-on-three penalty just moments into the action, they recovered to win their third-straight game in Pittsburgh for the first time since 1985 (you know, the year Alex Ovechkin was born).

“Today we play hard, better than last night,” Ovechkin said to reporters after the game. “We worked hard, we crashed the net and hit the guy and we have lots of traffic. It was a very emotional game.”

Speaking of Ovechkin, the talented left wing took over when it mattered, scoring two third-period goals and assisting on the game winner in the come-from-behind victory. While fellow Russian Evgeni Malkin got off to a fast start, scoring the game’s first goal, it was Ovechkin who had the last laugh.

“That’s what Alex does,” Boudreau said. “He’s a real emotional guy and he plays on that passion, and when he gets going, he’s pretty hard to stop.”

Just 24 hours after Washington fell to an inferior opponent thanks in large part to a combination of stupid penalties and a general lackadaisical attitude with the puck, the Caps eliminated many of the self-inflicted ills that led to their recent slide. In fact, it was the Penguins who continued to shoot themselves in the foot during the third period, when it seemed their emotions got the best of them after center Sidney Crosby was flattened by Ovechkin.

Former Capital Matt Cooke took a foolish penalty late in the second period because he felt the need to stick up for Crosby, who was simply leveled with a clean check. From that moment on, the Pens seemed more concerned with standing up for themselves then actually winning the game.

Penguins defenseman Hal Gill was penalized in the last minute of the second period for high sticking Caps center Sergei Fedorov. In the first minute of the third period, Penguins defenseman Brooks Orpik was whistled for tripping Caps forward Tomas Fleischmann. All the while, the Penguins players were chirping – at the referees, at Capitals players, at each other. They were no longer focusing on winning the game. They just wanted to play the role of tough guy.

Meanwhile, the Caps kept their eye on the prize and took the lead at 3-2 on Ovechkin’s first goal of the game, which came via the powerplay. After the Penguins tied the game at 3-3 on a beautiful shot from the blueline by defenseman Ray Whitney, the Caps powerplay struck again when Fleischmann dove to poke the puck past Pens goalie Marc-Andre Fleury for the eventual game winner. Although there was still nearly 12 minutes left in the third period, it was clear momentum had swung in favor of the Capitals.

“I think the focus of the game stayed on the game instead of on the individual,” said Boudreau of the Capitals play. “When you focus on the game, usually good things happen to the individuals, but a lot of times, it doesn’t happen when it’s the other way around.”

In addition to remaining focused on the task at hand and leaving any personal motivations at home, the Caps also avoided some of the same pitfalls that have plagued the team of late. Both of the powerplay goals came because players crashed the net. Ovechkin stood on the doorstep and took a couple swipes at the puck before finally driving the puck into the back of the net and, as previously mentioned, Fleischmann dove from close range to earn his 15th goal of the year.

When Ovechkin picked up his second goal of the night he was simply passing to center Nicklas Backstrom, who had crashed the net. The pass never made it to Backstrom, but that’s only because it deflected off of Whitney’s skate into the net. The goal wasn’t pretty, but it counted just the same as the highlight goals the team’s younger players prefer to score.

Here’s hoping this is the sign of things to come for the young Capitals. They were able to stay focused on what truly mattered even after their opponent continually tried to provoke them and eliminated many of the problem areas that keep Boudreau awake at night. If nothing else, Bruce could sleep easy on this night.