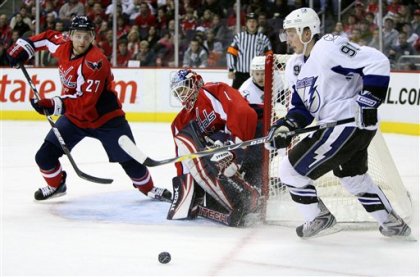 With nearly everyone on the roster finally getting healthy the Washington Capitals will soon face some difficult decisions.

Forwards Tomas Fleischmann and Sergei Fedorov return to action tonight against the Columbus Blue Jackets, which is great news. What’s not so great is that these guys returning to action puts the Capitals’ salary cap situation perilously close to the limit, meaning general manager George McPhee has some tough decisions to make in the very near future.

The one good thing to come out of the ridiculous amount of injuries Washington has battled this season is that many of the team’s top prospects have found their way into the lineup. On a near-weekly basis, it seems the Caps are calling up yet another player to fill in for an injured teammate. No one has done a better job of maximizing this opportunity than defenseman Karl Alzner, the fifth overall pick in the 2007 draft.

Not only has Alzner thrived, logging at least 18 minutes of ice time in 17 of 19 games, but he’s also had a positive impact on others. Since being paired with Alzner, defenseman Milan Jurcina has looked much more at ease on the blueline. Once a big body with loads of potential but not much to show for it, Jurcina has transformed into a completely different player (someone who actually looks like he belongs on the ice when the game is on the line). Jurcina’s confidence seemingly grows every shift he has alongside Alzner. With that in mind, it’s not much of a reach to suggest that sending Alzner back down to Hershey could also affect Jurcina, as well as the rest of the Caps’ defensive unit.

We caught up with Alzner after the Flyers game to see how his transition to the NHL game is going and to get his take on his uncertain future.

How comfortable do you feel these days?

“You know, I feel okay right now,” he said. “I mean, I’ve felt better. Sometimes I get a little nervous making plays with the puck, but I think that’s just natural for a guy in my position. I’ve just got to relax and not worry about the whole getting sent down and all that stuff. That’s the main thing that weighs in your head. I’m not going out on the ice thinking ‘I can’t play with these guys’ or ‘these guys are better.’ The only thing weighing on my mind is something like that, getting sent down.”

How are you going to react if, once everyone gets healthy, you get the unfortunate news that they’re going to have to send you back down to Hershey?

“I’ve just got to realize that it’s going to happen sooner or later most likely, unless something else goes down,” Alzner said. “That’s the way it works and I’m lucky to even get a chance to play this many games this season.”

Would it frustrate you though? We know you don’t want to take it personally, but it’s kind of hard not to, right?

“Yeah, you get frustrated,” he said. “You want to be in the place where you grew up dreaming about, and that’s right here. To get such a long taste, it’s like when I was at camp. I was at camp for over a month and then to have to go down, you really get used to it. Any change is like that is usually disappointing.”

Since we, here at Homer McFanboy, are qualified to speak on behalf of all Caps fans, we’d like to say that we sincerely hope the front office is able to find a way to keep Alzner in town. Much like he’s gotten used to being here, so to have we. We’re very used to seeing him anchoring an improved Capitals defensive unit that has been a large part of the team’s record-setting season thus far.

Just remember, the Capitals were 11-7-3 before Alzner. They’ve gone 16-4 since. That says all you need to know about the kid.