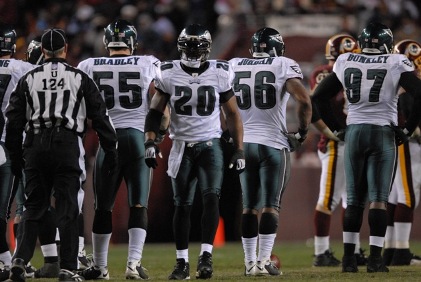 Let us say up front – we love fantasy football. We started back in 1996 and have run multiple teams each season since. That being said, one can’t help but notice the effect fantasy football has had on football.

Not tracking? Keep up.

This is the time of year where every talking head and every person with access to the “interwebs” wants to tell you how to “fix” [insert name of favorite sports franchise here]. Every doofus who has ever played the franchise mode in Madden or come in sixth place in a fantasy league feels compelled to tell you the Redskins should acquire Tank Johnson. Or Darren Sproles. Or Shayne Graham. Wait … what?!?! Someone actually used valuable space on Al Gore’s internet to start a sign Shayne … excuse us … “Shane Grahm” conversation?

Take our advice, you’re probably better off avoiding any team websites (with one notable exception, of course) and messageboards until after the NFL draft because every mouth breather in America apparently has the answers and wants to share them with us.

If that’s not bad enough, even the “pros” are getting in on the act. Locally, we’ve got someone we consider a personal friend, Rick Snider of the D.C. Examiner, throwing out the idea of the Redskins bringing Michael Vick to town. Yes, that Michael Vick. On a national level, there’s Jeffri Chadiha of ESPN.com suggesting that Eagles safety Brian Dawkins will be collecting mail at Redskins Park next season.

Never say never, but these two ideas, from people who are paid to write about sports, are nothing more than a “there’s nothing going on, so maybe I can drum up some hits for the website” cry for attention. And the fact that we linked to both of them plays right into their hands. (Editor’s note: dammit.)

What we should have done is ignored them. Right about now, no one has any clue what their team, including our beloved Redskins in particular, are going to do next. The players and coaches are all taking time off to blow off steam and separate from this past season. Fans should too.

If we’re talking crazy talk, then we could even suggest The Danny bring in a true football guru like Scott Pioli, the New England Patriots vice president of player personnel, to run things. But honestly, why waste the time and energy? We know damned well that, barring Marty Schottenheimer 2.0 in D.C., we’re getting another year of Vinny. Make your peace with it now.

Yes, this is the leanest time of the year, but do everyone a favor and take a break from the fantasy football talk. No one wants to hear your mock draft simulation for all seven rounds of the upcoming NFL draft. No one even pretends to care when you restructure the entire organization or petition to hand the starting job to the third-string quarterback. We’ve said it before and we’ll say it again – don’t be that guy.