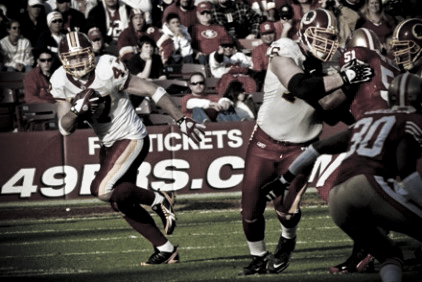 This has been a banner year for the Washington Redskins’ most popular player, tight end Chris Cooley.

In addition to marrying his lovely wife Christy, Cooley also earned his second straight trip to the Pro Bowl, set a team record for most receptions by a tight end and, oh by the way, started the most popular blog by an athlete ever.

One might think that with everything going his way, there’s no stopping Cooley. Well, that person would be slightly mistaken.

We heard rumblings earlier in the season that, although the Redskins as an organization have given little guidance, Cooley does have one rule he’s required to follow – do not talk about the offensive line. No, the front office hasn’t laid down the law. But the offensive line has, which is why, when Cooley mentions “air humping” a fallen lineman Happy Gilmore style, no names are actually used. He has to keep things generic and keep their names off of his website.

We have it on good authority that a certain tight end/blogger is banned from mentioning the offensive line on his website. What say you?

“No names,” said offensive tackle Jon Jansen. “I won’t use any names, but we like to think that what happens in here, in team surroundings, stays with the team and not on the internet.”

Have you ever checked out Cooley’s blog?

Obviously someone has, seeing as you guys have brought the issue up with Chris, right?

“Well, whether you see your name or not, you have family, friends or fans who will let you know what’s been on there. But honestly, I’m all for it. It’s something that he enjoys doing and the fans love it and I’m all for it, as long as there’s good taste involved.”

And he keeps his pants on …

“There’s always going to be mistakes along the way and you just hope they’re small ones,” Jansen said. “And that was a small one.”

With that, we sought out the blogger himself for answers.

We’ve been told that you’ve been banned from using the names of offensive linemen on your blog. Is that true?

(Laughs). “Yeah, but they like to be on the blog secretly,” Cooley said. “They just like to give me a hard time.”

But they keep track of what you’re posting, right?

“Yeah, they all find out,” he said. “They act like I’m one of the media. Like I’d sell them out or something. They’re fun. It’s always something interesting.”

So there you have it, Cooley can blog as often as he’d like, as long as no names of offensive linemen are used. And for the record, we know which lineman got “air humped.” We’d share with the class, but we’re not about to cross The Dirtbags. If they’re willing to come after one of their best teammates, then think of what they’d do to us.