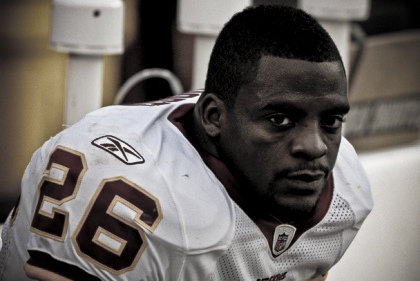 Well, wasn’t that a perfectly fitting ending for the 2008 Washington Redskins?

The regular season finale against the San Francisco 49ers represented everything that was good and bad with the Redskins this season. The team got off to a fast start and looked ready to cruise to an easy win, but a muddling offense and a bad turnover on a Clinton Portis fumble in the second half gave away any momentum the ‘Skins had built and next thing you know ‘Skins fans are scratching their heads and searching for answers after a 27-24 loss.

Sound familiar? It should. A 6-2 start had the talking heads and beat writers listing the Redskins in the league’s elite, with nearly everyone placing them in the top five of the NFL. But we’ve now just seen a 2-6 finish that’s got everyone involved frustrated, humbled and wondering what comes next.

When the Redskins rolled out 17-straight points in the second quarter, it looked like the burgundy and gold would match last year’s 9-7 record and go into the offseason feeling better about how the season went. And then the second half happened. That’s when we were treated to heavy doses of the same mental mistakes that have haunted the ‘Skins all season long. Dropped balls by receivers? Check. A defense that simply can’t make a stop when the game is on the line? Yep. Vanilla/predictable playcalling on offense? Absolutely. Add in the fact that the offensive line failed to get any push whatsoever to get the running game going (Portis’ longest carry of the day was just seven yards and he averaged just 2.8 yards per carry) and Zorn and friends are lucky the game was as close as it was.

3. “Make Me Better” by Fabolous

Really, from where we were standing on the sidelines, it looked like things would have been even worse had Redskins quarterback Jason Campbell not converted a few key third down plays (specifically the last play of the third quarter, a pass to tight end Chris Cooley, comes to mind) while also running for his life when no one was open and the pocket collapsed around him. Campbell rushed four times for 39 yards, including the fourth down play that tied the game with just over a minute to play in the game. There are a lot of people down on Campbell, and admittedly he needs to make something happen with this stagnant passing attack, but Jason showed a lot on Sunday.

Same goes for Chris Cooley, who continues to go all out every single play. We asked him after the game if it bothered him that he only had one touchdown catch this season (after averaging seven touchdowns a year his first four seasons in the league). Cooley said the team as a whole has had trouble in the red zone, so he just needs to work harder to get back on track. While other NFC East players whine and cry about not getting enough passes thrown their way, Cooley is more worried about what he can do to make his team better.

And the guy who absolutely deserves to be recognized for his hard work all season long is kick returner Rock Cartwright. The offense, the defense and every other aspect of special teams has taken turns driving Redskins fans crazy this year, but Cartwright’s returns have been the one constant positive. The guy returns every kick as if it’s his last and has more heart than players twice his size. The front office has a lot of decisions to make this offseason, but finding a dependable kick returner isn’t one of them.

For the 49ers, running back Frank Gore finished his third-straight season with more than 1,000 yards rushing, which is a new team record. Right before halftime, we happened to be standing next to Portis, who is very good friends with Gore. We couldn’t pass up the chance to have a little fun, so we leaned over and asked “Whose better, you or Gore?”

Clinton started laughing and said, “A protégé can never be better than his mentor, and I taught him everything he knows.” Like I said, he was laughing and was in no way being serious, but it was an enjoyable comment all the same.

The other line of the day came from Redskins linebacker Marcus Washington when 49ers safety Michael Lewis was injured trying to bring down Jason Campbell.

“Don’t they know he’s been eating his collard greens his whole life? They can’t bring him down like that,” Washington said to no one in particular.

This team might be going through a rough spot, but they’re still highly entertaining.

For those folks, like Homer McFanboy, who are fans of Chris “The Predator” Horton, we got to talk to him in the locker room after the game. He told us he definitely “got his bell rung” and that it wasn’t the first concussion of his football career. He said he should be alright, and as soon as we finished chatting a team doctor pulled him aside to go over a few things (avoid loud noises, etc.) to recover from a concussion.

Horton’s injury aside, one couldn’t help but notice that the Redskins are finally getting healthy, now that there are no more games to play. We asked Bubba Tyer if it’s frustrating spending the entire season battling injuries, only to get healthy the last week or two of the regular season.

Maybe that’s what ‘Skins fans need to do this offseason. Just take it easy and deal with whatever cards we’re dealt. Why stress over stuff that’s beyond our control? Why scream until we’re blue in the face because management decided to do something we didn’t like? Change is inevitable. There are clearly flaws with this incarnation of the Washington Redskins. Let’s all take a deep breath and see where our favorite football team takes us next.