predator versus the fans 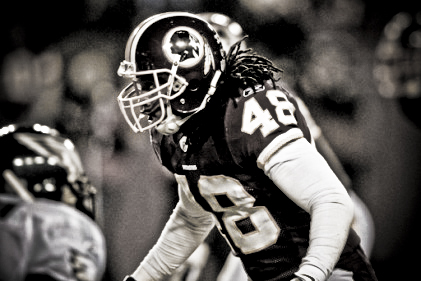 As if things weren’t bad enough with the Washington Redskins suffering through a December losing streak that ensured there would be no playoffs for the home team, things were even more depressing for Homer McFanboy because our favorite player was missing in action.

Redskins rookie safety Chris “The Predator” Horton missed most of the Baltimore game and all of the Cincinnati game due to a shoulder injury, meaning that even after the humbling losses, there was no voice of reason to make sense of it all. Luckily, Horton was back for the final home game of the 2008 season.

Chris, it’s no coincidence that we got you back in the lineup and the team got back on track and won, right?

(Laughs). “Right,” Horton said, still laughing. “Obviously it has nothing to do with me. I think we just came out as a team – on offense, defense and special teams – and we just got after it. As you saw, that game went down to the last couple of seconds, so it’s a good thing we came to work.”

That’s an Eagles team that has been unstoppable since Donovan McNabb got benched. They’ve been scoring 30 points a game and rolling over everyone. So let’s not try to downplay what you and this defense did against one of the hottest teams in the NFL.

“I think we played a pretty good game out there on defense,” he said. “But still, I’m still having little mental mistakes, but I figure the more and more I play, I’ll continue to become a better football player.”

While you were sidelined, the national media said this team had no heart, had quit on their coach and this game was just a formality because you guys were going to roll over for the Eagles. What the hell happened?

(Laughs). “I mean, whoever said that, they’re not in this locker room,” Horton said. “Obviously they don’t know what kind of guys we’ve got around here. I think every guy around here works at his highest level and every time he steps out on the field he’s going to give it his all.”

Even though you guys have been eliminated from the playoffs, is it nice to come out and do your best to keep your divisional opponents out of the post season?

Since the last time we chatted, you’ve gone out and posted your Xbox 360 screen name on your website. What’s up with that?

“Yeah, I’m inviting the fans to come and play some video games with me,” Horton said. “It’s good to let the fans connect with you. Obviously I can’t go sit at their house or give out my phone number, but I do play video games and I do still enjoy playing my Xbox. I figured for the fans who do play Xbox, if I’m on there, you can join the game with me.”

What games do you play?

Devin Thomas told us you’re no good at Madden. What say you?

“I’m alright at Madden, man,” he said. “I played against one of the fans and he beat me so bad, I didn’t want to play him again. He asked me to play him again and I’m like ‘Nah, I’m playing Halo now.’ Dude discouraged me from playing Madden.”

So there you go, The Predator is getting in the holiday spirit by playing video games with the fans – just as long as you don’t beat him too bad.