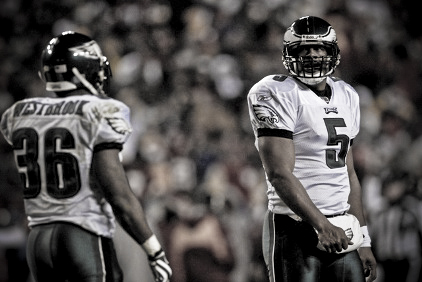 Even though we were busy getting interviews in the Washington Redskins’ locker room following the game, we want to start out by addressing something that happened on the other side of the stadium after the game. During his post-game press conference, Philadelphia Eagles quarterback Donovan McNabb was asked for his thoughts following the 10-3 loss.

“This is frustrating to come out here and play a team we knew we could beat,” McNabb said. “We made mistakes and mis-opportunities, its tough for us to swallow at this particular point.”

Some folks may remember that McNabb made similar comments about the “better team losing” when the Redskins beat the Eagles in Philadelphia earlier this year. Here’s our point – if your team is so much better than the ‘Skins, then why do you keep losing to them? How can you stand in front of the media and go on and on about how your team is superior when you fail to deliver? Last time we checked, your offense, led by you, has scored a grand total of one offensive touchdown this season against the Redskins. Eight quarters. One offensive touchdown.

So next time you’re asked to speak on the Redskins-Eagles rivalry, go ahead and remember which team has won three out of the last four matchups, big guy. And also feel free to keep in mind your team has now gone seven straight quarters without an offensive touchdown against that oh-so-beatable Redskins team you apparently need to re-evaluate your opinion of. Just don’t think about it while you’re on the field … it might make you throw up in the huddle. Again.