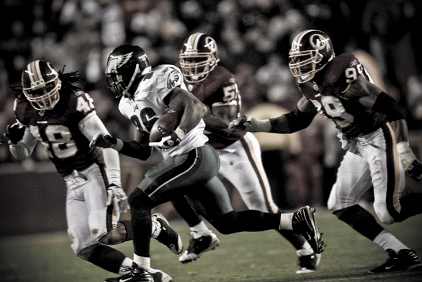 1. “Bouncin’ Back” by Mystikal

This game was a funny one. The national media had all but said the Washington Redskins as a team had quit on coach Jim Zorn a month ago. If you believed everything you read, then this team had no heart, the coach was running out the final two games before he gets canned and seemingly the entire roster needs to be turned over. Maybe this wasn’t exactly the case.

With the roster the healthiest it’s been possibly all season long, the Redskins looked like a different team – especially on defense. Forget about no names like Cedric Benson and Ryan Fitzpatrick marching up and down the field on them. That’s ancient history. Instead, what the FedEx Field faithful were treated to in the regular season finale was an inspired defensive effort that damn near shut out one of the hottest teams in the NFL. Remember, this is an Eagles team that had been averaging 30 points per game during their winning streak.

2. “Guerrilla Radio” by Rage Against the Machine

Redskins defensive end Jason Taylor went on the Junkies morning radio show last week and called himself out, essentially saying he’s not played up to the contract his employer is currently paying him. No doubt, it’s a bold strategy, but apparently it’s a smart one.

Because Taylor came out Sunday and easily played the best game of his Redskins career – picking up two sacks and causing the fumble that directly resulted into the only touchdown scored all game long. If this is what we can expect when Taylor goes on the radio, let’s get him a weekly segment on Redskins Radio. Doesn’t the team own a radio station? Seriously, this needs to happen – if for no other reason than this version of Jason Taylor actually resembled the former defensive player of the year.

3. “The Lonesome Kicker” by Adam Sandler

Redskins punter Ryan Plackemieier played the best game we’ve seen a punter play in a long, long time. The Redskins have gotten so little from their punters for so long that it’s truly jarring when one of them actually brings something to the table. Remember, this season started with Derrick Frost and some rookie punter “battling” for punting duties on the Washington Redskins, only to have both cashing unemployment checks before Thanksgiving.

So watching Plackemeier pin the Eagles with a barrage of spectacular punts was a thing of beauty. If you want to know why the Redskins were in a position to win with only 10 points on the board consider this – the Eagles average starting field position in the fourth quarter was their own 10 yard line. If that’s not worthy of a game ball, then nothing is.

It almost goes without saying, if you want to win in the NFL, you need to win two of the three phases of the game. Sunday, the ‘Skins dominated on defense and the special teams, for the first time in recent memory, was a factor in a positive way. That’s why ‘Skins fans aren’t sitting around lamenting over another anemic offensive showing.

We posed a fairly simple question to anyone we came across in the FedEx Field press box Sunday.

“Who was the last rookie head coach to get fired after winning eight games,” we asked.
No one had a clue. Why? Because it just doesn’t happen. So to all of those people who are convinced that owner Daniel Snyder will somehow find a way to screw things up and fire Jim Zorn, let history be your guide. It’s hard to win games in the NFL. As a rookie, it’s even harder. So please try to remember that finishing with anything better than a losing record is an accomplishment and Zorn a break. If he’s not back here next season, then it’s nothing short of a traveshamockery.

The Redskins family lost the greatest player to ever don the burgundy and gold when Hall of Famer Sammy Baugh passed away this week at the age of 94. Baugh might not have been the first NFL player to break out the forward pass, but he still revolutionized the game, much in the same way that greats like Michael Jordan or Wayne Gretzky did in their respective sports. In the NFL’s inaugural Hall of Fame class only two players were voted in unanimously. Needless to say, Slingin’ Sammy was one of them. His number 33 is also the only jersey number officially retired by the Redskins. Rest in peace, brother. You will be missed.