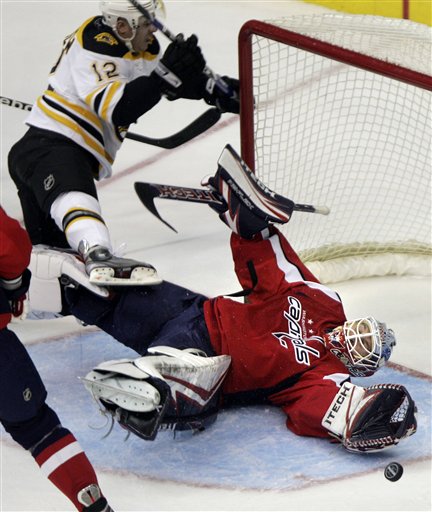 A funny thing happened this past offseason when the Washington Capitals were left at the alter by Cristobal Huet – the team accidentally found it’s number-one goalie.

Instead of re-signing with the Caps after coming over at the trading deadline last season, Huet leveraged the team’s offer into a bigger payday with the Chicago Blackhawks (a four-year deal worth $5.625 million annually).

That’s when general manager George McPhee quickly moved to ‘Plan B,’ which turned out to be signing free agent goalie Jose Theodore to a two-year, $9 million contract. Everyone assumed he would take over as the number-one goaltender while Brent Johnson, earning just $825,000, would fill in as needed. There’s just one problem – Johnson has clearly outplayed Theodore this season.

For the season, Johnson has a 2.37 goals against average, a .918 save percentage and a 8-4-2 record. Theodore has a 3.08 goals against average, .888 save percentage and is 8-6-1 on the year. Both players have been asked to do more while the team has dealt with an extraordinary amount of injuries, but Johnson has clearly done better shouldering the additional responsibilities.

In his last three games, all wins by the Caps, Johnson has an unheard of .952 save percentage. He’s only given up four goals on 83 shots during that span. Meanwhile, Theodore has lost his last two starts.

Last night was a perfect example of why Johnson should be the clear-cut starter. The Boston Bruins, the best team in the East Conference and winners of 17 of their last 20 games, were in town riding a five-game winning streak. No one has been able to slow them down all season and yet, Johnson sent them home shaking their heads and wondering what had just happened after turning in his best effort of the season.

In the first period, Bruins forward Patrice Bergeron flew in on a breakaway down the left wing. He fired a shot which Johnson turned away, only the rebound ended up on the stick of Chuck Kobasew, who thought he had an easy goal. Kobasew, who had crashed in from the right wing, quickly shot the puck towards a wide-open net, only to be stonewalled by Johnson.

And that wasn’t even the save of the night for Johnny. His second-period effort on Bruins rookie Blake Wheeler, who was standing on the doorstep and looked to have a “gimme,” is easily one of the best saves in the entire NHL this season. While Wheeler was planning his post-goal celebration after faking past Johnson for the easy score, Johnson lunged backwards and somehow dropped his stick on the ice just in time to keep the puck out of the net.

“(Wheeler) actually made a really, really good move,” Johnson said to reporters after the game. “I thought he was definitely going to his backhand. I just threw everything and prayed that he didn’t get it up. I’m sure he wanted to get it up but I just got lucky there.”

What did Wheeler say about being on the wrong end of the NHL’s highlight of the night?

The truth is, Johnson should have earned a shutout Wednesday night. Nothing to take away anything from a very talented Bruins squad, but Milan Lucic’s goal with 35 seconds left in the second period was caused by a Tyler Sloan mistake – not because of anything Johnson did. His 33-save outing against a very lethal Boston offense is easily the most impressive performance by a Capitals goalie this season. Coach Bruce Boudreau may never come out and formally announce Johnson as the starter, but the number at the end of the season will show who the team turns to when they absolutely need a win.

And to think, we may never had gotten the chance to see just how talented Johnson is if Huet didn’t get greedy.