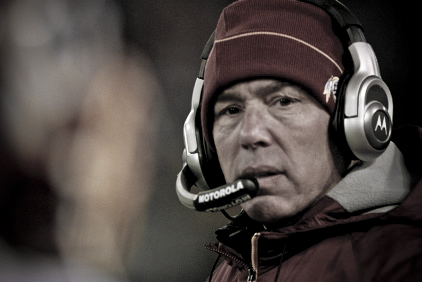 We’re sorry to disappoint you, but the entire Clinton Portis-Jim Zorn issue that’s got your panties in a bunch? Yeah, it’s nothing. You’re not going to want to hear us, but that’s the truth.

How often has your boss pissed you off by doing something you didn’t agree with? It happens all the time in every workplace in America. The only reason this is newsworthy is because one of the parties involved failed to keep things in house. But really, that’s just Portis. He’s always been an emotional guy who says whatever is on his mind. Remember before the season started when quotes came out about Portis wishing he could run behind a better offensive line? Yeah, those comments were forgotten as soon as C.P. reeled off five-straight 120-yard performances.

This issue involving the team’s best offensive player and the rookie head coach is already dead and gone as far as those who work at Redskins Park are concerned. We had a chance to talk to Portis’ teammates Wednesday to gauge their reaction on all the drama and can tell you with 100 percent certainty that the rest of the locker room wasn’t even fazed by this.

“That’s just Clinton,” said center Casey Rabach, who’s been around the star running back long enough to know he marches to the beat of a different drum.

When asked for his thoughts on it all, defensive tackle Anthony Montgomery admitted that he and his wife jumped on the computer to see what all the fuss was about. They expected to hear all of this scandalous and juicy drama from Portis on the John Thompson Show, but were disappointed.

“My wife fell asleep while we were listening to it,” Montgomery admitted.

If this is a major issue that will surely rip apart an entire locker room, then why is Mama Montgomery dozing off? And why did Monty, who has to spend the majority of his time in this supposed hostile-work environment, turn it off before he even finished the entire interview? Because it was a bigger deal to the media members who need to sell newspapers or get hits on websites than it was to the people who actually reside at Redskins Park.

Two things get D.C. truly fired up – a quarterback controversy and a big-time scandal. Folks thought that Portis versus Zorn was surely going to fit in the later category, but this ain’t it. There was plenty of hype, but truth be told Portis versus Brian Mitchell was more exciting than this. At least those guys were going back and forth, letting each other have it. This was just one frustrated player blowing off some steam after suffering through his team’s fourth loss in five games and being unhappy he wasn’t able to be more involved in trying to turn things around.

What would you rather have — a player who is unhappy because he feels he’s better suited to help his team in the game rather than on the bench or someone just going through the motions and collecting a free paycheck? We already tried the Brandon Lloyd era. How did that work out for us?

So take a deep breath and relax. Come Sunday afternoon all of this will be forgotten (well … until whatever substandard announcing team brings it up every time either Zorn or Portis is on the screen). Just realize that things could have been a whole lot worse. Just look on the other side of the field this weekend at Chad Johnson, who was once so unhappy with his coach that he punched him.

It’s all about perspective, fellas.