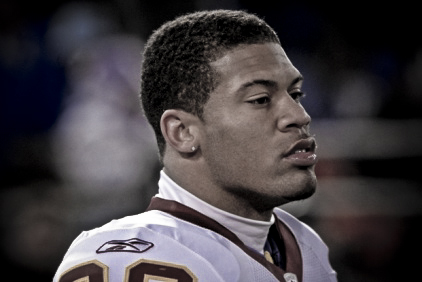 The story of the night Sunday in Baltimore was clearly safety Ed Reed, who finished with two interceptions and a fumble recovery for a touchdown leading the Ravens to victory over the Washington Redskins, 24-10. But another safety had himself a strong showing too.

LaRon Landry might have been overshadowed by Reed’s highlight reel, but the 24-year-old finished with an interception and a forced fumble on an otherwise forgettable night for the ‘Skins. The first came on a bad throw by Ravens quarterback Joe Flacco, while the later was a due to a devastating hit on the artist formerly known as Willis McGahee.

It took Landry 27 career games to get his first regular-season interception (he had two picks in the postseason last year), but he’s now got two interceptions in the last three games.

We know you’re not interested in moral victories, but congratulations on the interception. Can you walk us through the play?

“On the pick I just read the quarterback and yup, just went and got it,” Landry said. “I stayed in the middle and did my assignment like I was supposed to. I read my keys and just broke on the ball – made it happen.”

How familiar with this Ravens team are you? Did you get a scouting report on them from your brother?

(Laughs). “Nah, not at all,” he said. “That never happens. You just go out there and play ball. Guys who have brothers in the league, like [Philadelphia running back Brian] Westbrook … I mean, when we play the Eagles, it’s no secret. There’s nothing his brother [Redskins practice squad member Byron Westbrook] can tell us that can help us win the game or anything. Any competitor is not going to do that. I don’t care if he’s your brother or not, you still got to study like everybody else on the team.”

How frustrating was it for you personally when the defense needed a stop but couldn’t get the job done in the fourth quarter?

“It’s very frustrating and heartbreaking,” Landry said. “You’ve got to go back to the drawing board, have a great week of preparation and get ready for the next game.”

How close is this team to turning the corner? It just seems like right now, for whatever reason, things just aren’t clicking.

“It’s a team effort,” he said. “Once we come together and put it into our mind that we can’t be stopped and we can do anything we want to do, then we’ll start winning ball games. I don’t know what the problem is … I mean … each guy needs to give his own individual effort to help the team. Until then, we’re just not going to come out on top.”

From one safety to another, how good is Ed Reed?

As far as role models go, Landry could do a whole lot worse than taking notes from Ed Reed’s game – especially since the talented safety scores about as often as the Redskins offense these days. 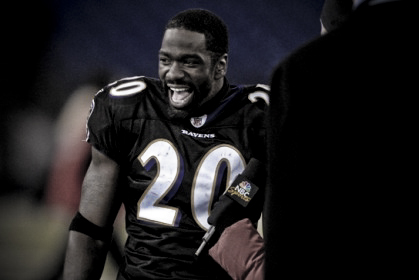