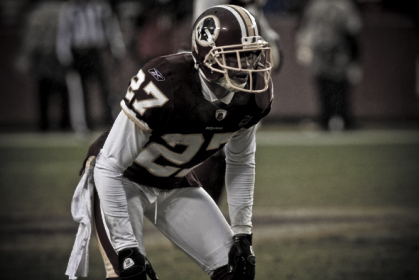 Let’s face it, fans of the Washington Redskins are panicking after the 23-7 loss to the New York Giants. The promising start is long gone and a serious winning streak to close the season is mandatory if the team is planning on making the postseason. In times like these there’s really only one person to turn to – cornerback Fred Smoot.

We know you’re the voice of reason, so we need you to tell them it’s going to be alright.

“There’s no reason to panic, man,” Smoot said. “The good thing about it is the same as the bad part about it – we’ve been here before. We realize that every game is a ‘must win’ and go into each one thinking that. We lost to a great team. We lost to the Super Bowl champions. We need to regroup, not panic. Let’s all come together and make this thing happen.”

With that crisis solved, we opted to switch topics completely. In light of the Plaxico Burress situation, has Smoot ever felt the need to carry a weapon?

“It’s all about give and take with that,” Smoot said. “We all wished to be the famous football player, but half the time we don’t want the responsibilities that come with it. You’re a target. The NFL tells us we’re a target, but I don’t think they know how in depth we are a target. We can’t even go out with our wife or something because people try to rob you. We dealing with the same thing with Sean [Taylor]. Who’s to say if Sean had a gun he’d still be here?

With that someone else came up and attempted to get Fred to talk about stuff that actually occurs on a football field. We wandered elsewhere, but just so happened to cross paths with Smoot again as he was heading out of the locker room.

We told Fred that we immediately thought of him when the news of Plaxico Burress’ incident first broke. That’s because Smoot stopped talking to the media a year ago in response to what he deemed irresponsible journalism during the Sean Taylor coverage. Some folks in the media automatically assumed that Taylor was in the wrong or that his “lifestyle” somehow led to his death. Smoot took notice of those individuals and made sure to give them the silent treatment. Remembering that scenario was reason enough for us to not automatically assume anything about Burress until all the facts came out.

We did want to follow up on one thing Smoot said earlier though, about athletes having the right to protect themselves. We asked him if that’s the case, wouldn’t it be wiser for a player to hire a bodyguard to protect them and let that person carry a weapon, if need be.

“Most definitely,” Smoot said. “Especially in a place with zero tolerance on that stuff like New York.”

So if you don’t learn anything else from this blog, you should know 1. there’s no reason to panic, the Redskins are in familiar territory with their collective backs against the proverbial wall and 2. If you want extra protection, hire a bodyguard. If all else fails, he can be the fall guy.