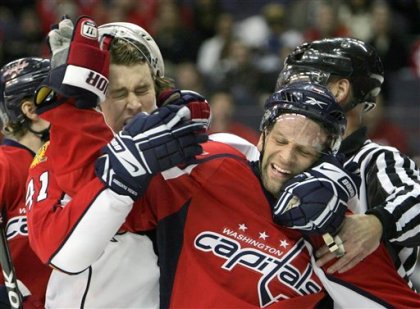 You would have thought the Wizards were the home team at the Verizon Center Tuesday night, with the lack of defense played by the Washington Capitals.

The team was painfully thin on defense to start the season, but last night’s game – a 5-3 loss to the Florida Panthers – featured Shaone Morrisonn, Milan Jurcina and four minor leaguers on the blueline.

Karl Alzner and Sami Lepisto are going to be regulars in D.C. some day (probably in the near future), but against Florida they both looked overmatched and out of place for chunks of the night. Sure, goalie Jose Theodore hasn’t been the most reliable netminder in the NHL this season, but he never had a chance Tuesday night.

“I don’t have the timing down yet,” Alzner said after the game. “I’m definitely going to go and practice that tomorrow.”

In the locker room after the Caps’ first regulation home loss of the season, we asked Alzner just how tough it is to learn the NHL game on the fly.

“It’s very tough,” Alzner said. “I felt awesome after training camp. I thought I had the timing down. I was feeling confident with the puck. You go out and play at this new level and then adjust yourself to that. I got away with it the first few games, but then tonight I was tested by a guy who’s been around a while and knows what to do. I just need to calm down a little bit and not worry about making mistakes.”

Alzner, to his credit, said he would seek out the coaching staff following the Panthers loss and get their feedback.

“I want to know what they want me to do exactly so I can settle in for as long as I’m up here and know I’m doing what they want,” he said.

But this loss doesn’t fall solely on Alzner, no matter how hard he was taking it. Tyler Sloan and Bryan Helmer might be enjoyable “feel good stories,” but neither player looked particularly up to the challenge against a very ordinary Panthers team. Sloan should consider donating his game check to charity after falling asleep at the wheel and leaving Panthers wing Radek Dvorak all alone on the doorstep for the hockey equivalent of a layup, putting Florida up 4-1 in the third period.

The truth is, ideally teams want to slowly phase in one, maybe two, rookie defenders at a time. Give them a chance to pick up some minutes and gain a certain comfort level out on the ice without asking them to do too much too quickly. Unfortunately for the Caps, that’s just simply not an option. And while blaming injuries or rookies might be convenient in times like these, the veteran players wouldn’t touch it.

“It’s not just the rookies,” said forward Donald Brashear. “We all need to do a better job and take some of the pressure off of them. If we play better the first two periods, we’re not in that situation in the third period.”

And while Brashear is intimidating enough to convince us to go along with whatever he’s saying, his teammates all agreed that the current injury/rookie situation wasn’t the only reason the Panthers were victorious.

“We’re not going to use that as an excuse,” said forward Brooks Laich. “You look at their lineup and they had four of their top guys out too. Prior to the game we talked about how hard they were going to work. We watched their game the other night when they played the Rangers and knew what kind of effort they were going to bring.”

That means guys who have been around a while need to step up and make plays, if for no other reason than to lessen the burden on so many of these young guys. And maybe that’s some of the problem.

If we’re being honest, Jurcina isn’t much of a pro caliber player. He possesses the prototypical big body general manager George McPhee desires, but that’s about it. He’s slow, both on his feet and to react to the play around him. If the Caps are killing a penalty and need Jurcina to clear the puck out of the zone, there’s a better chance of George W. Bush getting a third term in the White House than Jurcina actually getting the job done. Not only are the Caps asking four rookies to play an increased roll, but the same goes for some of the regulars too.

And yet, the Caps were still in the game until an empty-net goal with one minute left sealed their fate. That’s the maddening part of it all. This team, even without injured defenders like Mike Green, Tom Poti and Jeff Schultz, is still capable of beating most teams on most nights. They dug themselves into a hole against Florida, allowing the Panthers’ 27th-ranked powerplay unit to score on each of their first three chances and battled back to make things interesting after a lackluster second period.

“There’s just a lot of resiliency in here,” Laich said. “Look at our head coach, it comes right from him. Our lineup, even with the injuries – with [Alexander] Semin out, with [Sergei] Federov out, with Mike Green out – we still have some very explosive players in the lineup. Alex Ovechkin obviously speaks for himself. Same with [Nicklas] Backstrom. The goal Victor Kozlov scored tonight was a fabulous goal. We are a hockey team that sometimes scores goals in bunches.

“It’s a staple in the locker room that we’re never going to give up, no matter what the score,” said Laich. “We’re not going to roll over and die. I’m proud of our guys that we keep coming back. Unfortunately tonight it just didn’t come back all the way.”

Nights like tonight just go to show – the sooner some of the regular defenders return to action, the better. But in the meantime, these four minor leaguers are gaining valuable experience that could eventually help stabilize the Caps’ defensive rotation for the foreseeable future. It might not have been pretty, but we’re willing to sacrifice some in the interim for a chance at long-term success.