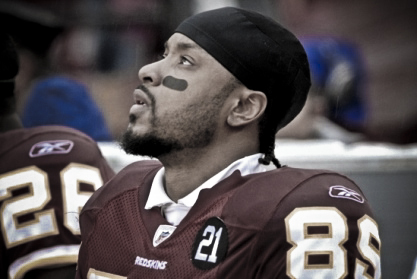 1. “Welcome to the Cruel World” by Ben Harper

In high school or college the home team always has the benefit of scheduling some cream puff for homecoming. Unfortunately, teams don’t have the same abilities when it comes to scheduling in the NFL, so the Washington Redskins had to face the best team in the league, the New York Giants when it came time to honor the one-year anniversary of the death of Sean Taylor.

Even though the weather was less than ideal, everything leading up to the game was perfect. Injured players such as running back Clinton Portis, middle linebacker London Fletcher and defensive end Andre Carter were all deemed healthy enough to play. Hall of Fame head coach Joe Gibbs was back in town for the first time since he retired, and so was the entire Taylor family. Not only did the team honor Taylor by adding his name to the Ring of Fame, but they also had a video tribute and presented his parents with a commemorative plaque.

By the time they announced Taylor in the starting lineup and Portis came out with a flag honoring his fallen teammate, we were pumped up enough to strap on the pads and take on the Giants. But as you know by now, things went downhill fast once the game began.

Giants head coach Tom Coughlin’s gameplan was to come out aggressive and try to knock the wind out of an emotional Redskins team early, and his team executed perfectly. A couple of clutch third down conversions by the formerly unreliable Eli Manning and suddenly the ‘Skins talented defense was on its heels. By the time Manning connected with wide out Armani Toomer for a perfectly-executed 40-yard strike, the game was pretty much over. The only way the Redskins could win was to keep it a low scoring affair. The Giants driving down the field with ease on their first drive was exactly what couldn’t happen and meant an unfitting ending to what should have been a day of celebration.

2. “Give It Away” by Red Hot Chili Peppers

While few reasonable people expected the team to win today, there are still several reasons for concern following this 23-7 loss. This offense is officially in a drought. Not since the Arizona and New Orleans games has this team had much success driving up and down the field and finishing drives. This offense, for whatever reason, is only good in spurts. They’ll put together half a drive, only to shoot themselves (sorry Plaxico) in the foot. It’s difficult to fathom an offense jumping out the gate with a rookie head coach early and then falling apart as the team has more time to get the subtle nuances down, but for whatever reason, that’s where we are.

Portis had just 22 yards on 11 carries. Campbell threw for 232 yards with no touchdowns and one pick. He was also sacked four times (twice by Renaldo Wynn, who the ‘Skins discarded ages ago). Tight end Chris Cooley had six catches for 71 yards, but he was the only player involved in the passing game to earn his paycheck on this day.

3. “Gimme Some More” by Busta Rhymes

The only highlights on this day were cornerback DeAngelo Hall picking off his second pass in three games and rookie wide out Devin Thomas scoring his first NFL touchdown. That’s it.

Hall should have had his third interception for the Redskins, but teammate Shawn Springs (whose normal gameday routine includes civilian clothes and a seat on the bench) collided into him when he was about to reel the ball in. The Giants ended up punting anyways and the ‘Skins offense had given no sign that they would have been able to do anything with the shorter field, but it would have been nice to have at least three plays to feel good about.

So here we are, praying this team catches fire in December for the third time in four years. This locker room has shown they play their best when their backs are absolutely against the proverbial wall, which is where they currently stand. Realistically, there is only one spot left to claim in the NFC playoff race. If they can’t grab the sixth seed, they’ll be home come January. That means they absolutely need to win at least three out of their final four games. Can they do it? History says yes. Us? Well, we’re not so sure this time around.

You didn’t think we were going to do a recap and not mention Plaxico Burress, did you? Seriously, what the hell was he thinking? (Other than possibly, “Oh shit, I just shot myself in the thigh!”) The Giants have been more than gracious to the troubled receiver this year, opting to try and sweep countless fines and incidents under the rug in attempts to deal with the diva internally. Of course, blowing off team meetings is one thing. Firing a weapon off in a crowded nightclub is another. This is clearly a cry for help (or he could simply be crying because there’s a bullet in his thigh. It’s hard to say).

All we know is, Burress will likely be charged with felony possession of a firearm and felony reckless endangerment to go along with his self-inflicted wounds. Once the season is over, assuming Burress somehow avoids jail time, he’ll most likely have to seek a new place of employment because the Giants organization is clearly moving in a different direction than Plaxico.