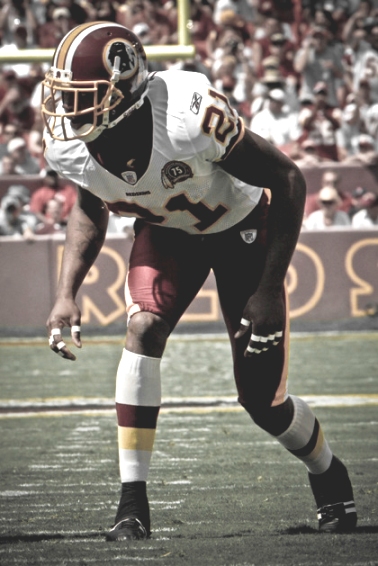 In addition to Thanksgiving, today sadly marks the one-year anniversary of the death of Sean Taylor, the Washington Redskins all-world safety. At only 24 and a lifetime ahead of him, Taylor’s life was taken away by some kids who broke into his house looking to score a quick buck. The death of the enigmatic Pro Bowler sent waves throughout the NFL and sent the nation’s capital and Miami, where Taylor grew up and starred at the University of Miami, into a deep depression. How could this happen to Sean?

While everyone affected waits for the intruders to receive their judgment day, the Redskins have had no choice but to move on. A lot has changed over the past year, with names like Joe Gibbs and Gregg Williams no longer a part of the organization, but many of the players say Taylor is still very much in their minds and in their hearts. This Sunday, before the Redskins take on the New York Giants, Taylor will be honored when his name is added to the Ring of Fame at FedEx Field. The ceremony figures to be a touching moment for players and fans alike.

“It’s going to be emotional,” said tackle Jon Jansen. “It’ll be an emotional time and I think it’ll be a time that everyone will remember for a long time. You can never really believe something like that happened. It’s such an unbelievable story, an unbelievable situation and a tragedy.”

Pretty much everyone in the ‘Skins locker room echoed Jansen’s comments.

“It’s definitely going to be an emotional moment,” said defensive tackle Anthony Montgomery. “He was a great football player and a great teammate. We still miss him a lot. I’m happy that they’re honoring him like that because I believe if he’d have had a full career, he’d have definitely been up there anyway. I think he’d have been a Hall of Fame player. It’s just good to honor him in that way, with his family and everything. It’s going to be special.”

Even the players who never had a chance to play on the Redskins with Taylor know this will be a special moment.

“He was just a menace,” said cornerback DeAngelo Hall. “He was a menace on the field and a great guy off the field. Me and Sean go back since college with the battles at Virginia Tech and Miami and we played together in Pro Bowls. He was just a balls-to-the wall kind of guy on every play. That was his mindset. That’s what made him so dominant.”

The Redskins will also put together a video tribute for Taylor. If it’s anything like last year’s Emmy award-winning tribute, it’s sure to be a fitting tribute to a beloved member of the Washington Redskins family.