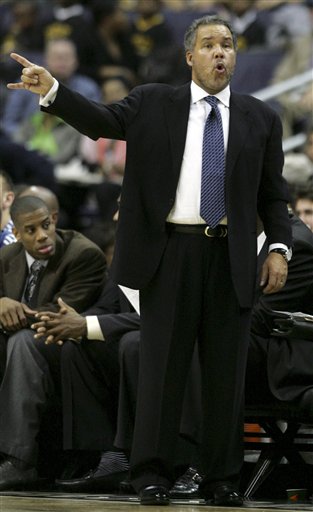 Yes, the Washington Wizards were able to snap a five-game losing streak and earn their second win of the season last night by beating the Golden State Warriors 124-100. But if you think that things are automatically “all good” in Wiz land simply because the team fired coach Eddie Jordan and replaced him with Ed Tapscott for the remainder of the season, then you’re setting yourself up for failure.

The first game after a coach is fired is usually good for a win – if for no other reason than because the players are still in that “oh crap, management noticed we’re all getting free paychecks” mindset. It’s true, you can’t fire your players in the NBA – not with their guaranteed contracts. So if you need to really shake things up, then you hope to send the proper message by firing the coach. If that doesn’t work, then you’re probably cheering for the New York Knicks.

And it’s understandable to fire “the other” Jordan, who had guided the team to an NBA-worst 1-10 record to start the season. But the problems run much deeper than a coach who seemed to have been tuned out by some of his players. Whether by design from “Big” Ernie Grunfeld or directive from owner Abe Pollin, this is a severely flawed team that is typically suited to qualify for the playoffs, and then get sent home almost immediately.

The Wizards, for as long as they’re led by forward Antawn Jamison, forward Caron Butler and oft-injured guard Gilbert Arenas, are a shoot first, defense is optional squad. They are a team content to jack up 20 footers and (who thought you’d ever hear this) without Brendan Haywood, they’re not even remotely interested in doing the dirty work in the paint on either side of the court.

So when teams tighten up and go into lockdown mode when the playoffs roll around, the Wiz look great one night and then struggle to score 80 points the next. But because the Wes Unseld Era Bullets/Wiz were so pitiful for so long, no one cared. As long as this team made the playoffs, there would be confetti falling from above and banners celebrating simply qualifying. Gold stars for everyone!

And even if management suddenly realized that this team has problems, there’s no easy answer in sight. The truth is, the Arenas signing this past offseason is ultimately going to take folks back to the Chris Webber days. Giving $100 million to a supposed franchise player who simply can’t stay healthy, is a sure-fire way to ensure your team goes nowhere fast. While every other team is clearing cap room to take a run at LeBron James, Dwyane Wade and Chris Bosh when they become free agents, the Wiz are helping Gilbert pick out his suit to wear on the bench each night and hoping that a 32-year-old Jamison suddenly learns how to play defense. Not good times for the home team.

So feel free to let optimism run through your mind that maybe, just maybe Tapscott is the next Bruce Boudreau and will be able to instantly right the ship the way Bruce did last season with the Capitals. But chances are, regardless of what Tapscott brings to the table, the Wizards will be cellar dwellars for the forseeable future not because of the coach, but because of the team management sends out on the floor each night.