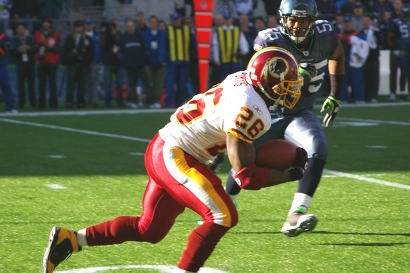 After back-to-back losses to the Pittsburgh Steelers and the Dallas Cowboys, the Washington Redskins needed to get back on track and return to the formula that brought them success earlier in the season. With that in mind, head coach Jim Zorn turned to running back Clinton Portis, who responded 143 yards on 29 carries (after rushing for just 119 yards in the last two games combined) and carried his team to their first win in nearly a month.

As he’s done for most of the season, Portis did the heavy lifting for the ‘Skins erratic offense. Although he’s still nursing a sprained knee and several other nagging injuries, the league’s leading rusher with 1,206 yards through 11 games, got better as the game went on and wore down a feisty Seahawks defense with his punishing running style. Out of his 143 yards on the day, 67 of them came during the fourth quarter (when Portis averaged a whopping 6.7 yards per carry).

Take, for example, the Redskins second-to-last drive of the game, a drive that started on their own four-yard line with just over seven minutes remaining. Clinging to a 20-17 lead, the ‘Skins turned to Portis on first down and he responded with a nine-yard run. On the next play Portis rushed for 11 yards. The third play of the drive brought more of the same, with Portis busting out a 20-yard gain. The Redskins looked to have the game all but wrapped up as they continued to move the ball with ease while simultaneously killing the clock until backup running back Ladell Betts, giving Portis a breather, fumbled the ball at the Seattle 22-yard line.

Fortunately the Redskins were able to intercept a Matt Hasselbeck pass on the next play to effectively end the game, but the truth is the Redskins could not have beaten this 2-9 Seahawks team without Portis.

Overshadowed by Portis effort was that of Seattle running back Maurice Morris, who rushed for 103 yards on just 14 carries. Morris, who primarily backs up running back Julius Jones, came into the game with 39 carries for 175 rushing yards in seven games this season, and yet, managed to gash the ‘Skins defense seemingly at will in the early stages of this game. His first carry of the day was a 44-yard explosion that would have ended in the endzone, if not for a great individual effort by safety LaRon Landry to save what could have been a back-breaking touchdown in the first quarter.

Speaking of Landry, he also made his presence known in the third quarter with an acrobatic game-changing interception of an errant Hasselback pass. Landry now has three career interceptions against the Seahawks quarterback (counting the two picks he had in the playoff loss to Seattle last season) and zero against the rest of the NFL.

Another vital cog in the Redskins offense is fullback Mike Sellers, who bulldozed Seattle defenders while blocking for the running game and also contributed to the passing game with four catches for 30 yards. Sure, he dropped a “gimme” touchdown, but Sellers made up for it the rest of the afternoon by paving the way for Portis to run all over Seattle’s Qwest Field.

It’s funny that a game featuring two supposed West Coast offenses came down to a battle of running games, but that’s exactly the case. Thanks to Portis and Sellers, the Redskins ran 30 more plays than the Seahawks (76 to 46), had nearly twice as many first downs (24 to 13) and controlled the ball for nearly 17 minutes longer than Seattle (38:27 to 21:33). It’s hard to win the game when you can’t get your defense off the field, and in the rare moments Seattle offense was in the game, Hasselbeck split his passes evenly between Seahawk receivers and Redskins defenders (two touchdown and two interceptions).

4. “Down” by Stone Temple Pilots

Portis (knee and hip), Defensive end Andre Carter (foot), defensive tackle Kedric Golston (ankle), and defensive tackle Cornelius Griffin needed medical attention at various points during the game. Wide out Malcolm Kelly and cornerback Shawn Springs were back in action after extended absences due to injury. Injuries are a part of the game and every team is battling this issue this deep into the season, but if the ‘Skins are going to continue to win, they need to catch a break or two in the injury department. It goes without saying that if Portis or wide out Santana Moss aggravate an injury and are sidelined for long, then the offense is in serious trouble. And the fourth-ranked defense needs guys like Griffin and Carter healthy as they head into the last month of the season – especially against physical opponents like the New York Giants and the Baltimore Ravens.

It wasn’t pretty, but in the end Jim Zorn was able to get a victory over head coach Mike Holmgren because he went back to basics. Recent history shows that the Redskins are at their best when they’re able to run and stop the run. Portis did more than his fair share to help the ‘Skins improve to 7-4, but the Redskins run defense should be an area of concern.

If the Redskins are realistically going to be a playoff contender this year, then they need to tighten up against the run. Morris’ 103-yard effort follows Cowboys running back Marion Barber’s 24-carry, 114-yard night one week ago. While Barber is among the league’s elite, Morris hadn’t rushed for 100 yards since 2006. Watching the game, one couldn’t help but noticed the Redskins undersized front seven getting pushed around and beaten by the Seahawks offensive line at the point of attack. Yes, the Redskins secondary is among the deepest in the NFL, but teams are going to see the film of the Seahawks and Cowboys running all over the ‘Skins front seven and continue to try and exploit the problem until adjustments are made.

On offense, the Redskins just need to continue to try and mix things up. Portis is the work horse, but a dependable passing game will prevent defenses from stacking the line of scrimmage in an all-out effort to shut Portis down. The touchdown quarterback Jason Campbell threw to wide out Antwaan Randle El was a perfect example of what this offense can do. In a five-receiver set, Campbell found Randle El, who had cut behind tight end Chris Cooley in a crossing pattern, for an eight-yard score. Plays like that are going to be vital down the stretch if the ‘Skins have any hope of keeping defenses honest and, more importantly, keeping Portis healthy.