not ready for primetime 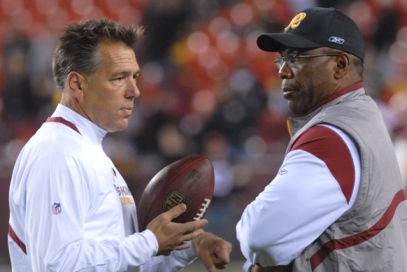 Pro Football Talk is reporting that the Washington Redskins game against the Ravens in Baltimore Dec. 7 has been moved from a 1 p.m. start time to NBC’s primetime slot for Football Night in America. Thanks to flex scheduling, the New England-Seattle snorefest will be removed and replaced by the “Battle of the Beltway.” But is that a good move for the Redskins? Not if this season’s results are any indication.

The ‘Skins are currently 7-4, but three of their losses have come during primetime games. The Redskins began the 2008 season with a 16-7 Thursday night loss at the New York Giants. The ‘Skins then were blown out 23-6 by the Pittsburgh Steelers in the Monday night “Election game” and lost to the Dallas Cowboys 14-10 the following week during the same Sunday night timeslot. So Redskins fans, I ask again – should we be happy that the team’s game has been moved from Sunday afternoon (where the team is 7-1) to primetime (with the maroon and black 0-3 in front of a national audience)?