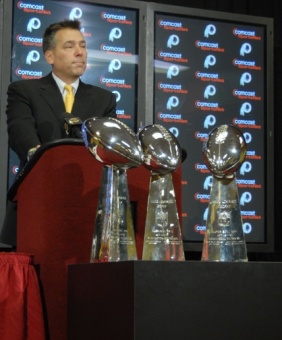 Let’s flash back to a kinder, gentler time. Back when the economy wasn’t such a four-letter word and fans of teams like the Detroit Lions, Cincinnati Bengals and Seattle Seahawks still had reason for optimism. Let’s take a trip back to Feb. 10, 2008.

That’s the day owner Dan Snyder and right-hand man Vinny Cerrato officially introduced Jim Zorn as the newest head coach of the Washington Redskins. While the bulk of the media was only interested in covering the news of the day (i.e. – the immediate impact of the hiring), we promptly locked in on a slightly longer term vision. We had only one simple, but important, question to ask Zorn on his first day:

You were on the coaching staff in Seattle that eliminated the Redskins from the playoffs two out of the last three seasons, so you know everything the ‘Skins need to work on to be a better team, right?

“I don’t know about that,” Zorn said with a laugh. “I know that defensively … Matt Hasselbeck is a good quarterback and we had a good plan. There are great football coaches on that staff in Seattle and we put a good plan together. That’s what you’ve got to do. You’ve got to put out your best stuff and then you plan the game and you see if what you did as a coaching staff and as a group of players was good enough to win the football game. All we need to do here – this is a winning program and a playoff team – we don’t need to revamp everything. What we need to do is just tweak all the things that are already in place to get over that hump. If there were no changes made on this coaching staff, they would be talking about the exact thing.”

We thanked him for his time and suggested that if all else fails, if Zorn can use his insider’s knowledge to help the ‘Skins finally earn a win in Seattle, the locals would be pleased with the new regime.

Fast forward to this week and well, the natives are indeed pleased because the Redskins won. Jason la Canfora of the Washington Post reports that one of the biggest reasons the ‘Skins were finally able to win out west was because the former Seahawk decided to share that insider’s info. Here’s an excerpt:

Zorn told his staff how the Seahawks had evaluated Washington’s defense before the teams’ playoff meeting in January and shared his perspective on how Seattle quarterback Matt Hasselbeck reads the game.

On Sunday, after a 20-17 victory at Qwest Field, he gave credit to a pass rush that has been much maligned in recent years. Defensive coordinator Greg Blache used more seven- and eight-man blitzes than he had all season, and where in the past the Redskins often kept two safeties back on third-and-long situations, Sunday they attacked Hasselbeck in droves.

“Coach Zorn told us how Seattle looked at us, especially on third down,” safeties coach Steve Jackson said. “So we figured we’d vary the looks this time, and see if they could adjust to it. It worked, and we got the win.”

Later on in the story, Hasselbeck is quoted as saying, “They gave us some looks early on that we had never seen them do. It gave us some problems. It gave me some indecision.”

No one outside of the organization knows for sure if that was just a one week treat or if the defense will indeed become more aggressive. But whatever happens from here on out, just know that Zorn has more than lived up to any reasonable expectations we dreamed up (after all, how many talking heads uttered the phrase “and he’s never even been an offensive coordinator before” that day?) and this team has a very real shot at the playoffs because he’s been able to help out on both sides of the ball.