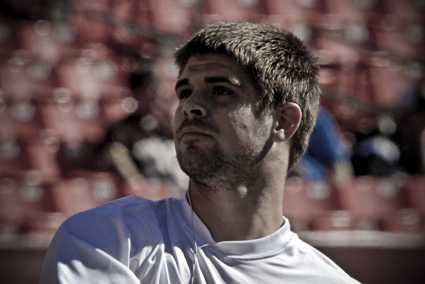 Last season 13 members of the Dallas Cowboys made the Pro Bowl. And although the game is completely irrelevant, that numbers didn’t sit well with those in and in support of the Washington Redskins.

This year, the ‘Skins front office vowed to take a different approach – thus the creation of Vote the Redskins Ticket, a campaign encouraging fans to vote Redskins players to the 2009 Pro Bowl. Out came buttons, banners and bumper stickers, all encouraging fans to take a stand and vote for the burgundy and gold. If fans can regularly vote for their favorite contestants on meaningless shows like American Idol or Dancing with the Stars, then why can’t they do the same for their favorite football players?

So why are we bringing all of this up now? Here are the NFC’s 26 starters through this week, as voted by the fans:

That’s right, folks. There are 21 Redskins players currently leading at their respective positions in fan voting for the Pro Bowl. The rest of the conference? They’ve got five (and only two come from outside of the NFC East). A year ago only Cooley, Samuels and long snapper Ethan Albright earned a trip to the Pro Bowl from the ‘Skins roster, so we’ll call that a slight improvement.

As a refresher, the selection process for the NFC and AFC squads consists of votes from coaches, players and fans. The consensus ballots of NFL fans, players and coaches each count one-third towards determining the rosters. So fans shouldn’t automatically expect to see half of the Redskins active roster in Hawaii this February.

That doesn’t mean this isn’t impressive. It is. Every NFL fan has the opportunity to vote for whomever he or she sees fit. It just so happens, they’re all voting Redskins. So keep up the good work, ‘Skins fans. It’s nice to show that the fans really do care – especially when all we’re hearing from the “real” media these days is that Redskins fans suck and give their tickets away to towel-waving Steelers fans.

If nothing else, maybe this will force the NFL to finally fix the Pro Bowl, which is nothing more than a glorified popularity contest anyways. And if 21 Redskins do make the Pro Bowl, can one of them buy a ticket for backup quarterback Colt Brennan? I hear he’s kind of popular out in Hawaii or something.