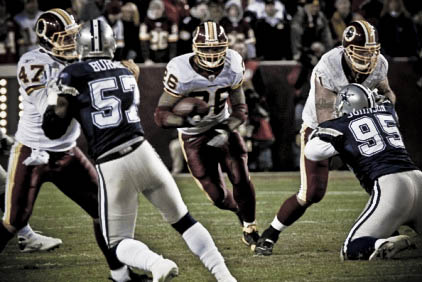 Spin it however you’d like, but things just aren’t clicking on the offensive side of the ball for the Redskins these days. If ever there was a game to be fired up for, it was this one. First of all, a win Sunday night against your hated rival effectively eliminated the Cowboys from the playoffs. That’s always enjoyable. Then, you’ve got running back Clinton Portis, who everyone said there was no way he was playing, strapping it up and not only playing hurt, but starting. And oh, by the way, your two Hall of Famers – wide receiver Art Monk and cornerback Darrell Green – received their HOF rings in a ceremony before kickoff. Like we said, if the team couldn’t come out of the bye week with all of that going for them and get a win, then it’s time to start asking some serious questions.

One player who needs not be a part of the soul searching Clinton Portis. All week long we kept hearing that there was zero chance Portis would be able to play against the Cowboys, and yet, there he was warming up on the field before kickoff. We had a chance to talk to his mom down on the field about an hour before gametime and she told us that while her son wasn’t 100 percent, he was definitely going to play and give it everything he had. He knew how big this game was and there just wasn’t any way he was going to watch from the sidelines when his teammates needed him (commonly referred to as “pulling a Shawn Springs”). It matters not that Portis finished with 15 carries for 68 yards. Just seeing him tough it out and limping back to the sidelines in between plays showed everything you need to know about the Redskins’ best player.

Outside of Portis, there are some major causes for concern with the ‘Skins offense, which has recorded just six touchdowns over the last five games. During that same span, the team has scored more than 20 points just once – and that was against the winless Detroit Lions. With the nation watching as Washington hosted back-to-back primetime games, the ‘Skins scored a grand total of one touchdown in losses to the Pittsburgh Steelers and Dallas Cowboys.

This team needs to stick with what works. Go back to basics. Something. Because what we’re seeing right now is not an offense capable of any kind of consistent production. If this team can’t find a way to challenge opposing teams downfield, then it’s going to get awfully crowded at the line of scrimmage. If teams don’t respect or worry about getting beat by the deep ball, then you’re going to have eight defenders in the box ready to stuff Portis and the running game or blitz Campbell.

We’ve always been of the mindset that if you get a big turnover, then you come out on the next drive and go for the kill shot. Unfortunately it seems like this team has exactly one receiver (Moss, Santana) and one tight end (Chris Cooley) they can count on in the passing game. With Moss being the only legit deep threat, teams simply roll an extra defender to his side and take away the chance for the homerun play. If the ‘Skins don’t get some sort of contributions from Antwaan Randel El, James Thrash, Devin Thomas or Malcolm Kelly to help take the pressure off of Campbell and Moss, then it’s going to be a long second half of the season.

Who knew that cornerbacks were actually allowed to intercept passes? Who knew that a Redskins defense could actually pick off two passes in the same game? Who knew that DeAngelo Hall, playing in his first game with the ‘Skins, would not only find himself in the defensive rotation, but would jump to second on the team in interceptions?

Sure, Oakland thought it was best for the franchise to release Hall after paying him $8 million for just eight games, but how many times have we seen a player find a new lease on life as soon as the are no longer in the Raiders organization? Hall is just 24 and is a two-time Pro Bowler. In the first quarter of his first game with the Redskins Hall showed why he’s considered a playmaker. He jumped on a Tony Romo pass intended for wide out Terrell Owens and actually came up with the interception. Hall simply being here gives this defense plenty of options and you’ve got to believe that if he reverts back to that Pro Bowl level he’s capable of that the team can officially say goodbye to Springs.

5. “Sad But True” by Metallica

Instead of harping on the negatives, we decided to end this week’s recap on a lighter note. The Philadelphia Eagles tied the Cincinnati Bengals 13-13 yesterday in the NFL’s first tie since 2002. But the best part is that franchise quarterback Donovan McNabb admitted after the game that he didn’t know it could end in a tie. In his post-game press conference McNabb said he thought there would be a second overtime if the score was still tied after one extra session.

“I’ve never been part of a tie,” McNabb said. “I never even knew it was in the rule book. I was looking forward to getting the opportunity to get out there and try to drive to win the game. But unfortunately with the rules, we settled with a tie.”

The ‘Skins might have lost, but at least they know the basic rules of professional football.