stats are for losers 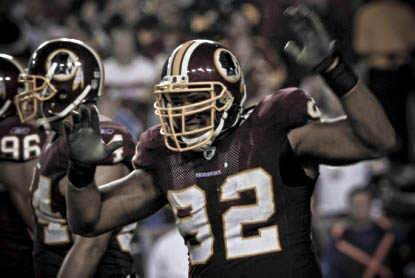 When the Washington Redskins acquired defensive end Jason Taylor on the first day of training camp, ‘Skins fans immediately began to compare the team’s defensive end duo of Taylor and Andre Carter with the NFL’s elite. Both had double digit sacks last season, so folks assumed that visiting quarterbacks would spend the bulk of the season running for their lives. As we’ve seen through the first half of the season though, that simply hasn’t been the case.

Taylor has been in and out of the lineup thanks to a left calf injury and something called acute compartment syndrome. He’s spent more time on the sidelines (standing next to oft-injured cornerback Shawn Springs) than actually pressuring QBs. The 11-year veteran has played in six games this season, registering 12 tackles and just one sack. Meanwhile, defensive end Demetric Evans, who has been with the team since 2004, has assumed Taylor’s role – both as a starter and in terms of generating constant pressure – racking up 14 tackles and a team-best 3.5 sacks. It should be noted that the Redskins, as a team, have just 15 sacks through eight games.

We had a chance to talk with Evans after the Redskins’ 23-6 loss to the Pittsburgh Steelers. Evans has flown under the radar for much of his seven-year career, so naturally one might think that being the team’s best defensive player on the field Monday night would cause Evans to seek a little attention and/or glory. That simply wasn’t the case.

“It was one of those games where the stage was set and as a D-line we wanted to go out and make plays,” he said. “Unfortunately, the ball didn’t fall in our favor.”

But you seemed to have a solid game with 2.5 sacks, right?

So much for his strong outing going to his head.

While Demetric wasn’t in the mood to pat himself on the back, we’ll gladly show him some love anyways. If he continues to play at this level the rest of the season, then the ‘Skins defensive line might do just fine without Taylor. You can have all that Dancing with the Stars attention. Evans just wants to win.