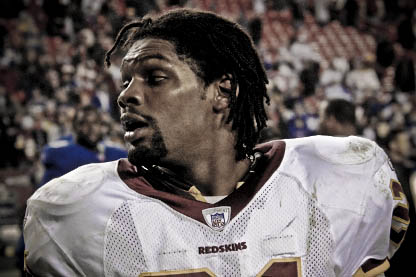 ASHBURN, VA – The late Sean Taylor will take his place among Washington Redskins greats when he is inducted into the franchise’s Ring of Fame in a ceremony prior to the team’s contest against the New York Giants on Nov. 30, 2008 at 1 p.m. It will be the first game following the anniversary of Taylor’s tragic death at the age of 24, which occurred on Nov. 27 of last year in Miami.

“It’s appropriate that Sean joins our Ring of Fame after a stellar career cut short far too soon,” said Redskins Owner Daniel M. Snyder. “His life touched so many of us in such deep and lasting ways. His presence is all around us, in our organization and among our fans.”

Executive Vice President of Football Operations Vinny Cerrato added, “Sean was developing into one of the best to ever play the safety position, as well as becoming a role model to those who knew him. He still touches us every day in some way on and off the field.”

Taylor will be the 43rd member admitted into the Ring of Fame, which honors those who have made distinguished contributions to the team. He is the first since Gary Clark entered on Oct. 7, 2007. The ceremony will feature a tribute and messages from former teammates as well as the presentation of a commemorative plaque to members of Taylor’s family.

Fans are encouraged to arrive early at FedExField for the pre-game ceremony.

With his incredible combination of size, speed, athleticism, ferocity and instincts, Taylor was one of the most unique and dynamic athletes the game has ever seen, despite playing less than four seasons. He was a two-time Pro Bowl selection after the Redskins made him the fifth pick of the 2004 NFL draft following an All-American career at the University of Miami.