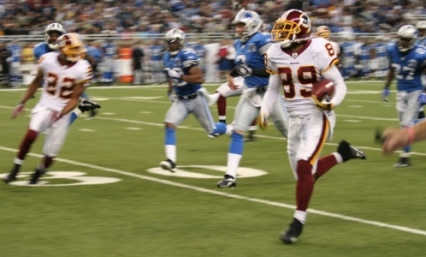 Yes, the Washington Redskins defeated the Detroit Lions 25-17. That doesn’t mean everything is necessarily peachy though.

Before the game even began, one couldn’t help but be concerned. Less than an hour before kickoff, the Redskins announced their inactive list and while running back Ladell Betts and the regularly injured duo of cornerback Shawn Springs and wide out Malcolm Kelly were out, there were a few surprising names also on the list. Safety Chris Horton, tackle Chris Samuels and defensive tackle Cornelius Griffin were all being held out of the game due to various ailments.

Word began to spread that if this were a playoff game all three would most likely be active, so immediately the question was raised – were the ‘Skins taking the Lions too lightly? Did they go into this game almost as if it was a preseason game, resting their starters as if the outcome was never really an issue? Whatever the rationale, Redskins fans couldn’t feel good that just two weeks after losing to the previously winless St. Louis Rams, the ‘Skins seemed to assume a league doormat would just roll over simply because the all-mighty Redskins were in town.

Thank the lord for wide receiver Santana Moss. If not for the continued resurgence of “the other Moss,” the ‘Skins would probably be doing a lot of soul searching the day after another humbling loss to an inferior opponent. As he’s managed to do for much of the 2008 season, Moss simply outmatched whoever drew the assignment of trying to slow him down.

This week, Moss finished with a season-high nine catches for 140 yards and a touchdown. They went to him early and often in Motown and the Lions could do nothing to stop the speedy wide out. Moss touchdown, a 50-yard bomb in the third quarter, was text-book Santana – catch the ball and make people miss.

(Editor’s note: This officially ends the tribute to Detroit music portion of our playlist).

Okay, let’s get the negative part out of the way early – running back Clinton Portis and head coach Jim Zorn had what Portis termed a “misunderstanding” during the game. At the end of the first quarter, Portis checked out of the game, reportedly with an equipment issue, and didn’t let Zorn know what was going on. And then, early in the second quarter, with the equipment issue resolved, Portis checked himself back into the game. Well, Zorn again was left out of the loop with which running back was going to be in the game on what play. After the drive the cameras clearly showed Zorn unhappy with how things played out and letting Clinton know it.

Of course, Portis went on to have another stellar day. He had 24 carries for 126 yards in route to his fifth consecutive game with at least 120 yards rushing, and now leads the league with 944 yards on the ground – an amazing 260 more than anyone else. Think about that for a moment – Portis could take the next two weeks off and still possibly lead the NFL in rushing. Not too shabby.

It’s been a troubling year for special teams coach Danny Smith. While his unit has routinely ranked as one of the better units in the NFL, his guys have struggled to handle the basics this season. Both the Philadelphia Eagles and New Orleans Saints returned punts for touchdowns this year, the rookie punt ended up getting fired for being the worst in the league in every meaningful category for punters and Antwaan Randle El has officially become the anti-Devin Hester, a.k.a. – the most disappointing punt returner in the game. But other than that, how did you like the play Miss Lincoln?

Fast forward to this week and magically things were much more enjoyable. Kicker Shaun “Shazam” Suisham connected on four of five field goal attempts and someone finally tripped up Randel El before he made it onto the field for another uninspired return. Moss, in the game in place of Randel El, bounced off teammate/would-be tackler Devin Thomas and raced 80 yards for his first punt return for a score since 2002.

The Redskins now find themselves in rare company, as one of four teams with six wins. With a 6-2 record at the midpoint of the season, the ‘Skins have blown through every conceivable expectation set prior to the season on a team with a rookie head coach. Even if the team plays .500 ball the rest of the year, they finished with a 10-6 record that pretty much always means playoffs.

There’s also reason for concern with this bunch, which seems, for better or for worse, to play to the level of their competition. That’s fine when you’re playing the Super Bowl champions or your hated rival, but not so much when you’re going up against winless punching bags. There’s also the subject of injuries, which seem to be plaguing the Redskins training room. Several of the guys on the offensive line have been banged up and the same goes for key players on the defense like Fred Smoot, Griffin and the oft-injured Springs.

Throw in minor bumps and bruises to Campbell, Portis and Moss and there’s a concern that the key contributors might not be able to play all the way down the stretch. While this team does have more depth than they’re given credit for, there’s always a breaking point. One untimely injury to Portis or Campbell could derail an otherwise promising campaign. But if the ‘Skins can avoid any major injuries and continue to play competitive football week in and week out, fans just may be able to continue this enjoyable ride.