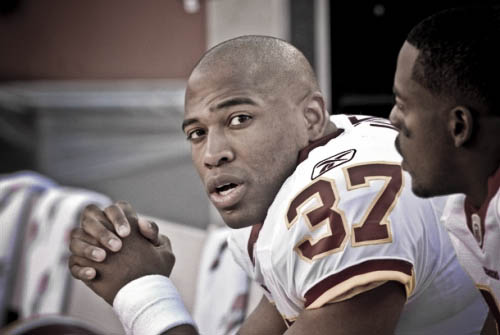 As far as debuts go, running back Shaun Alexander’s start to his Redskins career was a tame one. His first carry went for eight yards, but his two other carries went for one yard and a loss of one. Three carries for eight yards isn’t what one might expect from a former NFL most valuable player, but we’re willing to give Alexander a pass as he gets back into the weekly grind. After the game we had a chance to catch up with Alexander in the locker room to get his take.

Shaun, your first game as a Washington Redskin is in the books. How do you feel?

“It feels good to get a win,” Alexander said. “This is a good thing and I’m honored that I’m a part of such a great team. It was good to get out there and play a little bit.”

It might have taken a little bit longer than you anticipated, but how does it feel to finally be a part of the 2008 season?

“I knew I was eventually going to play,” he said. “I think it was just about when was I finally going to heal up and finding the right team. I thank God every day that it was the Redskins.”

So how did it feel to get a couple carries and to get some hits in there?

“It was good,” he said. “Football is football, you know. It was exciting to go out and play and I’m excited to be a Redskin.”

“It felt like I was someplace special from the very beginning when I saw Chris [Samuels] and Cornelius [Griffin] sitting in the locker room when I first got here,” Alexander said. “It’s already feeling like home to me.”

More than a few Seattle Seahawk fans warned us that Alexander would be moody and difficult. We’ve had the chance to chat with him twice and have seen nothing but a guy who seems genuinely thrilled to be a part of this tight-knit team with so many players and teammates he has experience with and considers friends. Maybe it’ll happen and he’ll turn the corner for the worse, but in the meantime the ‘Skins have found themselves a cheap and reliable backup for the stretch run.