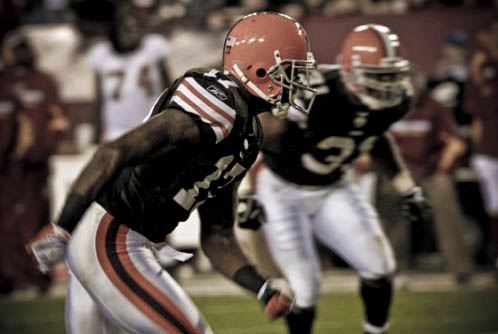 Cleveland Browns receiver Braylon Edwards had an interesting quote in last week’s edition of Sports Illustrated. When asked by Peter King of his thoughts about the Browns missing the playoffs, even though they finished the season with a 10-6 record, Edwards had this to say:

“We didn’t deserve it, but the Titans in the playoffs?” he said. “Tampa Bay? The Redskins! You can’t tell me we couldn’t beat the damn Redskins.”

Well, the Browns might not have had their chance to take on the Redskins last season, but as fate would have it, they rolled into FedEx Field this season with a chance to put their money where Edwards’ mouth is.

As ‘Skins fans know by now, the maroon and black won 14-11 and the Browns, thanks in part to several dropped balls by Edwards, went home humbled. Anyone want to send Edwards and friends home with a parting gift?

“Well tell him, you can’t beat the Redskins,” said cornerback Fred Smoot. “Point blank. I think we came out there today and proved it.”

But did the Redskins players take it personally when Edwards ran his mouth and called them out in one of the biggest magazines in the country?

“Our forefathers have died and fought for our freedom and for our freedom of speech,” said linebacker Marcus Washington. “You can say whatever you want to say, but when you get out there on the green grass, in between those white lines, it doesn’t matter what you say. People can’t hear you anyways. It’s all about that Riddell. Your helmet, your gear and the guys you’re out there with. All that talk goes out the door and you got to show it with your actions.”

Edwards finished the game with four catches for 58 yards. Not the kind of numbers someone should put up when they personally throw down the gauntlet and challenge a supposedly inferior team. So what did Edwards have to say for himself after the loss?

“I think I was a little frustrated early on in the game, and it just messed with my game,” said Edwards after the game. “As a professional, as a guy who has been here four years, Pro Bowl last year, it’s my job to block out frustrations and play ball. That’s my job on this team, and that’s what they expect me to do. So I just think frustrations got to me today, and I just didn’t perform when they needed me to.”

Couldn’t perform when they needed you? Hey Braylon, we hear they have a pill for that. Maybe your teammate can pick some up for you when hits up the pharmacy this week.