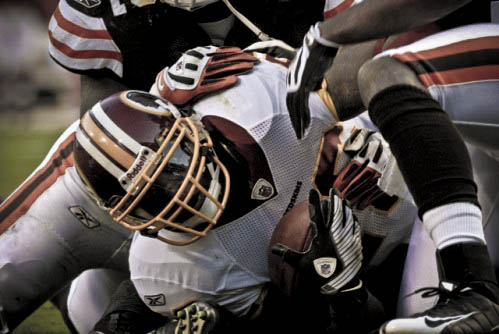 The Browns came into the game with a 2-3 record, but they had a sense of confidence after reeling off two-straight wins. The Redskins stood 4-2, but knew the needed to rebound after last week’s humbling 19-17 loss to the previously winless St. Louis Rams.

This game felt like an old-school slugfest. While the temperature was dropping in Raljon, Maryland, things were heating up on the field between the Browns and the ‘Skins. These might be two teams from different conference who were playing each other for only the second time in 17 years, but there definitely seemed to be some bad blood in the air.

As soon as the game started, these two opponents started flexing and jaw-jacking. Seemingly after every play someone had something to say. Cleveland wideout Braylon Edwards shoved Redskins cornerback Fred Smoot. Redskins safety LaRon Landry responded by returning the favor. A half dozen players from each team start chirping back and forth. While it wasn’t the prettiest first half in the history of professional football, the 0-0 tie at halftime was perfectly fitting for this knock-down, drag-out affair.

“You know, they felt kind of good after beating the Super Bowl champs from last year from our division, so I guess that they felt that the NFC East wasn’t that tough,” said Redskins cornerback Fred Smoot. “We wanted to show them that we really are that tough.”

All that was missing was a Jay-Z diss track and we would have had a full-fledged rivalry going on at FedEx Field.

Redskins running back Clinton Portis came into the game with 643 rushing yards, which was tops in the NFL. So what did he do for an encore? He rushed for 175 yards and a touchdown, and ultimately, he showed the ‘Skins offense that it is okay to score points again. While Portis did finish his fourth straight game with more than 120 yards, he also caused a bit of unnecessary drama by fumbling after a 24-yard run on the first play after the Redskins defense’s goal-line stand prevented the Browns from putting points on the board late in the fourth quarter.

We’ll let him slide though, since he has 134 rushing yards more than anyone else in the NFL, seven rushing touchdowns and is averaging five yards a carry on the season. Most importantly, he continues to do the heavy lifting for the Washington Redskins supposed West Coast offense.

We briefly mentioned the defense’s stellar play earlier, but they deserve much more praise. Last week against the St. Louis Rams, the ‘Skins defense didn’t allow any points. This week, led by middle linebacker London Fletcher, the defense was nearly as impressive, starting with that goal-line stand. The Cleveland Browns had four chances from the four-yard-line or closer and couldn’t find the endzone. Even after Portis’ unfortunate fumble, the defense still didn’t go down without a fight. When Cleveland quarterback Derek Anderson finally connected with receiver Joshua Cribbs on a one-yard score with just under three minutes remaining in the game, it marked the eighth play in which the Redskins defense was asked to make a goal-line stand.

One week after the Browns steamrolled the New York Giants by three touchdowns, Cleveland’s offense was held to just 236 yards of total offense. In the first half, Browns quarterback Derek Anderson completed just three of 14 attempts for 17 yards. Last week, the ‘Skins defense held the Rams to just 200 yards. At this point, saying the stingy Redskins defense is making it tough for the opposition would be an understatement.

Another player who deserves to be singled out is Redskins cornerback Carlos Rogers. With fragile cornerback Shawn Springs sidelined yet again, this time with a calf injury, Rogers was asked, once again, to step up and fill the void. And boy did he ever.

Not only did Rogers shut down whoever he lined up against, finishing with a team-high three passes defended. But it was the way Rogers was able to get the job done that had folks after the game seriously asking if that was Carlos’ best game as a Washington Redskin. Between frustrating Edwards and the Browns receivers and the newfound physical aspect of his game, Rogers is finally living up to being a top 10 draft pick.

“He played real well today,” said Smoot. “He tackled well and he did a wonderful job, man.”

But the highlight of Rogers’ game came in the third quarter, when he leveled Cribbs with a jarring hit that left the talented receiver K.O.ed on the ground.

“Coming from a corner? Very physical hit,” said Redskins safety LaRon Landry. “I’ve got no complaints. He done it the way I would do.”

So while Dallas Cowboys cornerback Adam “Pacman” Jones might get more airtime, just know that the best cornerback taken in the 2005 NFL draft was Carlos Rogers.

Last week, the Rams won on a last-second 49-yard field goal attempt. This week, the Browns had a chance to force overtime with yet another last-second field goal attempt, this time from 54 yards out. Thankfully, kicker Phil Dawson couldn’t connect. His attempt had the distance, but sailed wide right giving the Redskins the 14-11 victory and helping them to a 5-2 record on the season. All five of those wins have one thing in common – each game was decided by a touchdown or less. So one piece of advice for Redskins fans – don’t miss a minute of the action this season. If the first seven games are any indication, every game this season will come down to the wire.