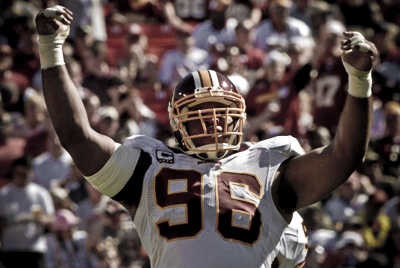 Longtime fans of the Washington Redskins know that their favorite football team, more than anything else, has a direct effect on who wins the presidential election every four years. Since 1936, the ‘Skins on-the-field results have decided who spends the next four years in the White House (well, except four years ago when the referees took back a would-be Redskins touchdown because of a bogus penalty on wide receiver James Thrash, but we believe they’ve been punished more than enough since then).

So if the Washington Redskins are willing to go to the trouble to select the most powerful leader in the free world, then the least you can do is thank them by showing your support for ‘Skins players in the Pro Bowl voting. Year in and year out, discouraged ‘Skins fans lament the lack of maroon and black players in Hawaii, well this is your chance to do something when you Vote The Redskins Ticket For The 2009 Pro Bowl.

So head over to Redskins.com and cast your vote. Otherwise, we just might have to live in a world where a dozen Dallas Cowboys earn Pro Bowl status year in and year out. None of us want that.

* – This message is approved by Cornelius Griffin, who, in the above photo, is rocking his inner “Johnny Drama.”