shaun of the dead 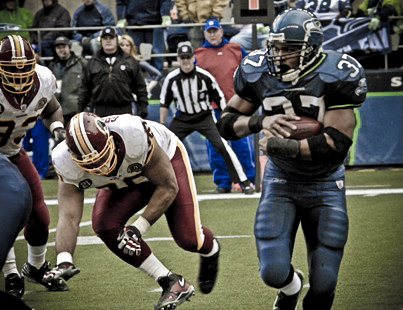 During a normal work week, Wednesday is my day off. But then again, during a normal work week the Washington Redskins don’t sign a former NFL most valuable player. So instead of sitting around in my boxers playing video games all day, I opted to put some pants on and head over to Redskins Park to catch up with running back Shaun Alexander, the newest edition to the maroon and black.

What can you tell me about the Washington Redskins?

“Growing up I wanted to be like John Riggins,” Alexander said. “I wore number 44 as a kid and wanted to have my hair cut into a Mohawk.”

How did that happen?

“My family loved the Redskins,” he said. “My father would show us clips of them. We looked at them like the Alabama of the NFL, because they were so classy with Joe Gibbs and everyone.”

So you’re happy to be here then?

“To me, this is the perfect situation,” he said. Alexander then went on to rattle off the names of Chris Samuels, Cornelius Griffin, Jason Campbell, Mike Sellers and Shawn Springs as players he’s excited to play alongside.

“I guess I’m back to being Little Shaun,” Alexander said with a smile of being teammates with Springs again.

So why were you, a former NFL MVP, out of football for so long?

“Because it takes time to heal,” Alexander said. “I was banged up with a couple different nagging injuries and needed time to get better.”

What do you say to those who are concerned you may come into the organization and be disruptive or try to start some kind of running back controversy?

“I’ve never been that kind of player,” he said. “I’ve played with other backs like Ricky Waters and [Maurice] Morris throughout my career. I have no problem doing whatever my coaches ask of me.”

And for those who are interested, Alexander is already engaging in talks with injured safety Reed Doughty to acquire the number 37 (Dan Steinberg has more on this and says Doughty will likely switch to number 23). Alexander said he’s worn that number since high school, when one of his coaches told him to pick a jersey number that no one else wore. His advice was, “Wear a number that when people see, they think of you.”

All in all, Alexander genuinely looked thrilled to be a member of the Washington Redskins. He said his main mission is to get fullback Mike Sellers into the Pro Bowl, but that was probably just because Big Mike was nearby. In fact, everyone who walked by us during our four-minute chat had something to say to the newest addition to the locker room. It’s not every day a backup running back gets this much attention, but that’s mostly because it’s not every day a former NFL MVP wanders into the building asking for little more than minimum wage and an opportunity to show he’s still got game.

I’d share highlights from my interview with punter Ryan Plackemeier, but really, other than admitting when he was a kid he thought the Redskins were located in Washington state, there wasn’t much else to talk about.