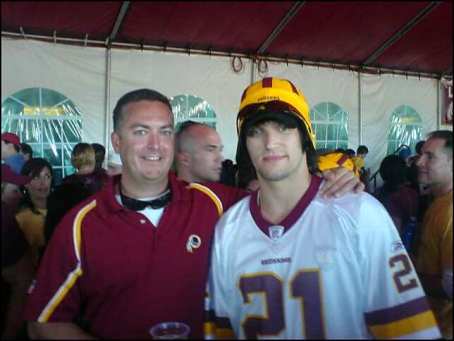 All apologies are due up front, as I hoped to get this up prior to the Washington Capitals’ season opener late last week. Unfortunately, things got hectic on the McFanboy front and our 2008 season preview was put on hold for a few days. What’s lacking in timeliness will hopefully be made up for in quality (or maybe word count). So here are the top five questions facing Alex Ovechkin and the Capitals as they head into their most anticipated season in recent history:

What will Ovechkin do for an encore?

Last year, Ovechkin led the NHL with 65 goals and 112 points to capture the Rocket Richard and Art Ross Trophies. He also won the Lester B. Pearson Award as the top player voted by the NHL Players Association and the Hart Memorial Trophy as the league’s most valuable player (making him the first Washington-based athlete to be named a league MVP since Redskins QB Joe Theismann back in 1983). Oh, and he signed a 13-year contract extension worth a record $124 million and was even given a key to the city by D.C. mayor Adrian Fenty.

There’s absolutely zero chance Ovechkin turns dumb, fat and happy with his new contract. He’s much too talented and driven to go into cruise control. And unlike when the team dished out big-time money for moody diva Jaromir Jagr, Ovechkin is only 23. As good as his numbers were a year ago it’s safe to say his best days are ahead of him, which is why Caps fans are already convinced he’s the best player to ever play for the franchise.

Who will take the next step?

Whether we’re talking about defenseman Mike Green, center Nicklas Backstrom or center Brooks Laich, a host of players took a big step forward last year. Green went from scoring just two goals and 10 assists for 12 points in 70 games during the 2006-07 season to recording 18 goals and 38 assists for 56 points in 82 games as the Caps sure-fire number-one defenseman. His 18 goals were tops in the NHL by a defenseman and his eight powerplay goals a year ago helped anchor the Capitals’ lethal powerplay unit to a top 10 ranking mostly because opposing players were afraid of Green. Don’t believe me? Let me put it this way – would you want to pull a Patrick Thoresen and take a Mike Green slapshot in the beanbag? Me neither.

Backstrom started the 2006-07 season slowly (although an argument could be made that the entire team started slowly), but stepped up after two key moments. The arrival of head coach Bruce Boudreau and an injury to fellow Swede Michael Nylander that elevated Backstrom to the top line with Ovechkin kick started the rookie’s inaugural season. Backstrom finished his rookie campaign with 14 goals and 55 assists for 69 points in 82 games, which was good enough to earn him runner-up honors as the NHL’s rookie of the year.

In his previous two seasons with the Capitals, Laich scored 15 goals and 24 assists for 39 points in 146 games. Last season however, Laich tallied 21 goals and 16 assists for 37 points in 82 games. What the stats don’t show was that on a team comprised mostly of finesse players, the guy known as the “Ladies Man” was the one player in the Caps lineup that showed a consistent willingness to stand in front of the crease and do the dirty work. (Seriously, if you missed it, go back and click the “Ladies Man” link. You’ll thank me).

During the off-season, Green signed a 4-year contract extension with the Capitals, which averages $5.25 million a year. Backstrom is still playing out his rookie contract, but Laich signed a three-year, $6.1 million deal. Can any of these three players build upon their highly-successful 2006-07 seasons or will it be someone like Nylander, left wing Alexander Semin or right wing Tomas Fleischmann who takes their game to the next level?

How much of a concern is the defense?

Make no mistake about it, rookie defenseman Karl Alzner should be playing in the NHL right now. For those not familiar with Alzner, he was drafted in the first round, fifth overall, by the Capitals in the 2007 NHL Entry Draft. After leading Team Canada to a gold medal at the 2008 World Junior Ice Hockey Championships, Alzner captained the Calgary Hitmen of the Western Hockey League, where he was named defenseman of the year and WHL player of the year.

Right now, without having played a game at the NHL level, Alzner is a top four defenseman – especially on the Capitals. So why is he starting the season in the minor leagues? While general manager George McPhee would have you believe otherwise, he’s hanging with the Hershey Bears for salary cap purposes only, which is unfortunate considering that many of the diehard Caps fans we’ve spoken with don’t trust defensemen Milan Jurcina, Jeff Schultz or John Erskine at all. Let me put it this way – if things were so rosy with the Capitals on defense then why exactly is a first-ballot Hall of Fame center like Sergei Fedorov spending time back on the blue line?

Will the puck stop here?

Last season, the Capitals traded for goalie Christobal Huet and rode his incredibly hot play all the way to the team’s first division title since 2000-01. By all accounts, the team did everything they could to resign Huet during the off-season, but he opted for a bigger payday in Chicago. The Capitals quickly turned to Plan B, announcing the signing of free agent Jose Theodore before the news of Huet to the Blackhawks was even made public.

But what does the team have with Theodore? Is he the goaltender who earned the Vezina and Hart trophies back in 2001-02, or is he the goalie known more for his erractic play and his choice of off-rink compainionship? With both Huet and long-time crowd favorite Olaf Kolzig elsewhere this season, it’ll fall on Theodore and backup goalie Brent Johnson to keep the Caps competitive in the Eastern Conference this year.

If you build it, will they come?

As the Washington Nationals clearly proved this season, D.C.-based sports fans will find better ways to spend their time and money than watching a deadbeat team get trounced on a nightly basis. Before there was the pitiful Nats, there was the rebuilding Caps, who sold off players like Jagr, Nylander and Peter Bondra (for Brooks Laich) in an effort to tear it down and build it back up. Instead of going the Wizards route and building a team good enough to make the playoffs annually but never win anything, the Capitals went the unpopular route by cleaning house and starting over.

Now, with talented youngsters like Ovechkin, Semin, Backstrom and Green, our nation’s capital is routinely treated to one of the youngest and most talented squads in the NHL. Add in veterans like Fedorov, Nylander and captain Chris Clark, and this is clearly a team that can compete with anyone.While the team once struggled to barely meet the league’s minimum salary cap, owner Ted Leonsis has stepped up and put his money where his mouth is, green lighting general manager George McPhee to spend as he sees fit (which has put the Caps near the max in terms of salary cap spending). But will the fans continue to embrace this team, especially when money is tight and the economy is less-than-ideal?

Actually, yes. The Caps season ticket sales are apparently up 4,000 from a year ago to around 10,000. Even on a Monday night against a rebuilding Vancouver Canucks team the Caps are drawing solid crowds, with D.C. enjoying the chance to “Rock the Red.” And if you’re one of the last kids in town to jump on board what could be possibly be the Caps’ first Stanley Cup championship season, then please, buy a ticket and join the party now. Trust me, you’ll want to be around when Ovechkin and friends unleash the fury.

(And finally, for an explanation of the photo at the top of this preview showing one D.C.-based heavy hitter embracing another, click here).