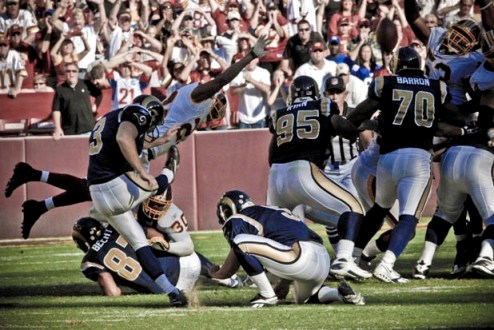 The previously winless Rams came into the game ranked 31st on defense and 30th on offense, and had been outscored by more than 100 points (147-43) through their first four games of their season. The Redskins came into the game riding high on a four-game winning streak that featured quality road wins over the Dallas Cowboys and Philadelphia Eagles. So what happened? The Redskins offense gave the game away, getting careless with the football and turning it over three times in the first half after going an NFL record five games without an offensive turnover to start the season. Though the ‘Skins were able to battle back after being down 16-7 to take a fourth quarter lead, the erratic play of the offense clearly made the game much more difficult than it needed to be.

“That’s what hurts the most,” said wide receiver Santana Moss. “Knowing you didn’t play your best as a team.”

2. “Drop It Like It’s Hot” by Snoop Dogg & Pharrell Williams

With time winding down in the first quarter, tight end Chris Cooley fumbled after an 11-yard catch. Early in the second quarter, center Casey Rabach’s poor snap got away from quarterback Jason Campbell. Right before halftime, guard Pete Kendall caught a tipped pass from Campbell and tried to … well … we’re not sure what he tried to do. All we know is Rams linebacker Pisa Tinoisamoa stuck his helmet in there, caused Kendall to fumble and Oshiomogho Atogwe scooped it up for a 75-yard back-breaking touchdown.

“It’s hard for me to know that I let down the 52 other guys in this locker room, the coaches, owners, the fans,” said Kendall. “If I knock that ball down, whether we make the field goal or not, we win the game today.”

Considering the Rams offense was shut out on the day, that’s probably an accurate statement. The Rams finished the game with the defensive touchdown on Kendall’s ill-advised effort and four fieldgoals.

The defense was stout for much of the afternoon. The Rams first drive of the day ended with linebacker Marcus Washington stripped the ball from Rams running back Steven Jackson and safety LaRon Landry recovery the fumble on the three yard line. One play later the Redskins were up 7-0. If the Redskins offense that we’d become accustomed to over the last four games — no turnovers, time-consuming drives — showed up, then this would have been a blowout, like every other game the Rams have been involved in. Rams quarterback Marc Bulger finished with 136 passing yards. Jackson rushed for just 79 yards. The Rams offense only gained 200 yards on the day and had just eight first downs. There’s plenty of blame to go around for the ‘Skins offense and special teams play, but don’t spend too much time hating on the defense. For the most part, they got the job done.

Redskins running back Clinton Portis might be the only Redskins offensive player who can say he earned his paycheck this week. With 21 carries for 129 yards and two touchdowns, he was the offense. When Portis rushes for nearly as many yards as Bulger, a Pro Bowl quarterback, passes for, you know he’s getting it done. Through six games, Portis has rushed for an NFL best 643 yards and six touchdowns. He’s currently averaging 4.7 yards per carry, his best effort since he came to Washington and .2 yards better than his career average. In his last three games alone, Portis has rushed for 395 yards and three touchdowns. Not only is he looking like the Clinton Portis who used to wear a WCW championsip belt around his waist during games in Denver, he’s looking like the NFL’s most valuable player through the first six games of the season. WHile there’s plenty of football left to be played, it’s great to see Portis return to the league’s elite status.