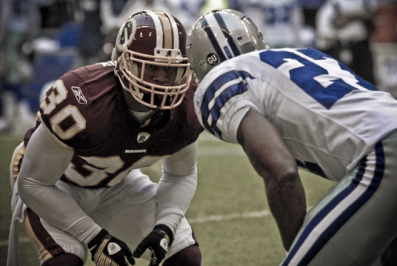 With the Washington Redskins in between trips to Dallas and Philadelphia to take on divisional opponents, the timing seemed right to ask a simple question – what do the players think of rivalries against teams like the Cowboys and the Eagles? We know how much these games mean to fans, but do the players actually care? Do they look at this game any different than a matchup with the Houston Texans or Seattle Seahawks?

“Oh yeah,” said safety LaRon Landry. “As soon as I got here I was introduced to this rivalry and all the hatred towards these guys. I just joined the bandwagon.”

Really? It happens that fast? As soon as you show up, someone like Redskins trainer for life Bubba Tyer sits the players down and brainwashes them into hating Dallas and Philadelphia? I went to track down one of the rookies to see if they’ve been educated on these historic rivalries yet.

“I think for the guys who have been here for a long time, they understand what it is,” said safety Chris “The Predator” Horton of the rivalry. “I’m new, so I’m just now getting into it. But I understand what a rivalry game is, playing USC every year. It’s starting to grow on me. I just know we’ve got to play real physical, because it’s going to be a physical game.”

Pretty much all of the players I talked to agreed that the fans are what make this rivalry so meaningful.

“This is huge for the fans,” said tackle Jon Jansen, the longest tenured Redskins player. “This is the game that everyone talks about for the entire year.”

Seriously? A full calendar year is at stake when hated division rivals do battle? How do you not let it affect you when you’re on the field?

“You know, obviously the fans remind you of the rivalry,” said center Casey Rabach. “It’s always in the back of your head. But you’ve got to approach this game as just another game. You can’t get wrapped up into all of the history and stuff. You’ve got to just go out and play your game.”

Since he set himself up for it, I followed up with a question asking what the heck happened during the Cowboys game, when Rabach was called for two penalties that negated Redskins touchdowns.

Since the ‘Skins were still victorious, I didn’t feel the need to kick Rabach anymore. Why be a downer when the rest of the locker room was enjoying a hard-fought win over a quality opponent?

“It’s great,” said defensive end Andre Carter. “This experience, by far, is big for the Redskins organization and for myself. Out of all the times I’ve played Dallas, I’ve never won a game in Dallas. With this being the last game for us here in this arena, it’s just something special.

And what did Carter say to the Cowboy fans sitting behind the Redskins bench just moments before the ‘Skins had won Sunday?

( Laughs). “You guys wanna be Redskins fans,” Carter asked the dejected Dallas faithful as the final seconds ticked away and the Redskins were victorious for the fifth time in the last seven meetings.

I guess the players get into the rivalry a little bit more than they’re letting on. Here’s hoping Carter and friends are able to recruit a few new ‘Skins fan this weekend in Philadelphia after another win.