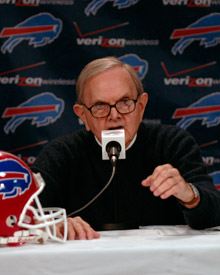 Things couldn’t be better for fans of the Tennessee Titans or Buffalo Bills these days, with both franchises playing great football and off to a 4-0 start. Coming into the season, most people would have predicted the New England Patriots, Indianapolis Colts or Dallas Cowboys to get off to such a fast start, but these two smaller market teams are the ones standing out a month into the season.

The Titans franchise has been around for nearly 50 years, and yet, this is the first time they’ve ever starts a campaign 4-0. What’s more impressive is that they’re doing it without the face of the franchise, quarterback Vince Young, who at last account was, at best, going through some personal issues and at worst, considering retirement at 25 or contemplating suicide.

With Young faltering, Kerry Collins followed the lead of his “brother from another mother” Redskins quarterback “The Tasty Drink” Todd Collins, transforming from backup to big shot seemingly overnight. Collins came in for an injured Young in week one and has the Titans offense playing with a swagger that’s been lacking since Steve McNair left town.

A rookie running back named Chris Johnson, out of East Carolina University, is staking an early claim for rookie of the year honors, racking up 337 yards and two touchdowns in four games. More importantly, Johnson is throwing the Titans a lifeline for drafting LenDale White, an overweight running back out of USC who is only averaging 2.7 yards per carry, but is flourishing as a goal line back with five touchdowns now that his role has been reduced.

The absolute hallmark of this is that the Titans defense is the nastiest defense in the NFL. They’re not just winning games, they’re beating opponents into submission – giving up a league-best 11.5 points per game and are tied with the Washington Redskins at plus six in turnovers.

But most importantly, they’re leading the AFC South and the Colts are not. Peyton Manning and friends had led the division for 56 consecutive weeks before their season opening loss. Now, the Titans hold a two game lead over Jacksonville and a three game lead over the Colts. As long as this defense is playing smash-mouth football and the offense is taking what their opponents give them, there’s no reason to think that the Titans won’t continue to roll.

As for the Bills, they, even more so than the Titans, are the feel-good story of the 2008 season. Mainly because they’re run by an inept owner, Ralph Wilson, who at 89 should be sitting around in his boxers doing the crossword puzzle and eating tapioca pudding instead of trying to run an NFL franchise.