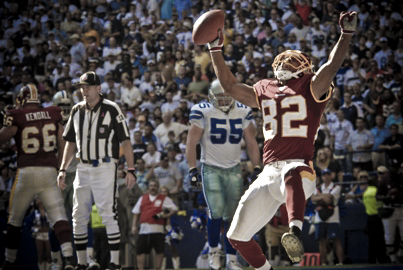 Sorry for the delay. Would have had this week’s playlist up earlier, but I was actually flying home from Dallas. Without further delay, here’s this week’s recap:

Las Vegas is in the business of making money. Whenever possible they prefer to win, not lose money – especially on the National Football League. When the lines came out early last week, the Dallas Cowboys were favored over the Washington Redskins by 11.5 points, which was the largest line of the week, Vegas’ way of saying “blowout.” Much like the rest of the country, Vegas gave the Redskins virtually no chance of winning in their final regular season battle at Texas Stadium.

“You got to play the game,” said rookie safety Kareem Moore in the locker room after the ‘Skins 26-24 win. “You can’t just play the game on paper.”

Heading into the contest, Cowboy fans were quick to point out that the Redskins had only won once in their last 12 trips to Dallas. So it’s with great joy that I point out that the ‘Skins have now won five out of the last seven contests overall in what was supposedly a one-sided rivalry. Actually, looking at that streak, it might be one sided after all, just not the way the “experts” think.

Last time the Redskins played in this building, Jason Campbell cried. In the locker room when no one else was around, the Redskins quarterback let his emotions get the best of him after failing to rally his team from behind in a 28-23 defeat.

This year, the Redskins were victorious plain and simply because of Jason Campbell, who went 20 of 31 for 231 yards, two touchdowns and a quarterback rating of 108.4. The Cowboys defense had given up just two passes touchdowns all season long. Campbell threw two in the second quarter. Through four games he’s gone head-to-head with Eli Manning, Drew Brees, Kurt Warner and Tony Romo and each game he’s posted a higher QB rating.

For the season, Campbell has assumed a role previously played by Jaguars quarterback David Garrard. Don’t try to win the game single handedly. Just make smart decisions, take what the defense gives you and put your teammates in a position to make plays. How’s it working out for him? Through four games, Campbell’s thrown six touchdowns with no interceptions or fumbles. That, my friends, is redemption.

Since 1971, Cowboys fans have said that the hole in the roof of Texas Stadium was designed so that God, himself, could watch his favorite team on Sundays. Well, if that’s the case, then the big guy had to be pleased watching two of his biggest fans, receivers James Thrash and Antwaan Randle El, each catch a touchdown in the Redskins’ win.

4. “Remember The Name” by Fort Minor

If you looked up the definition of the phrase “Redskins football” in the dictionary, it would say “run and stop the run.” For as long as our nation’s capital has had a team, that’s been the gameplan. Well, this week, fans were treated to vintage Redskins football with the ‘Skins racking up 161 yards on the ground while surrendering just 44.

Let’s not forget that these Cowboys were averaging 150 yards rushing per game this season heading into this rivalry game. But on Sunday, Marion Barber rushed the ball just eight times for 26 yards, while Redskins running back Clinton Portis ran 21 times for 121 yards for the good guys. In fact, Portis was the first running back to rush for 100 yards against the Cowboys in 18 games. That’s called getting it done.