a star is born

Terrell Owens loves to be the center of attention. That’s what we in the business refer to as an indisputable fact. He’s also a temperamental diva who has eventually turned on everyone who was ever dumb enough to trust the guy. So far, all has been well with T.O. in the “Big D.” But that might be starting to change with Owens making comments about not getting the ball enough after losing to the Washington Redskins 26-24 Sunday.

Asked if he felt he got the ball enough in the Cowboys’ loss, Owens had what we’ll call a momentary flash of honesty.

While Owens only had two catches for 11 yards at halftime, he finished the day with seven catches for 71 yards and a touchdown. For the day, the Cowboys threw 17 passes at him and handed the ball off to him two other times. So out of 58 offensive plays, T.O. was targeted 19 times (33 percent). Needless to say, everyone else in the NFL would be ecstatic if they were involved in a third of the plays. Not T.O. though. Mark this down as the day things start to go bad for the Owens-Romo-Cowboys love triangle.

And what does all of this have to do with a Redskins blog? Nothing. Absolutely nothing. It’s simply an excuse to post this photo of me celebrating after the game: 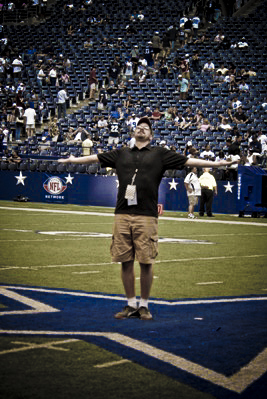 Terrell Owens might not have been able to get it done Sunday, but I sure as hell did.

[Editor’s note: an emailer brought up that this isn’t the first time I’ve decided to partake in these types of shenanigans, reminding me of the time I snuck onto the Richmond International Raceway for a few laps. What can I say? Guilty as charged.]