a wise man once said … 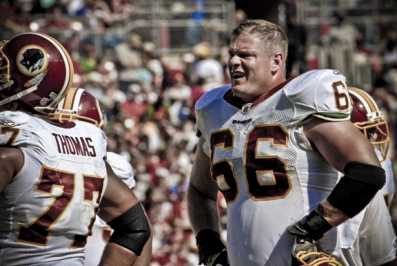 When it comes to soundbytes, Pete Kendall is no Clinton Portis.

Come to think of it, he’s no Chris Cooley and he’s not much of a Fred Smoot either. In fact, up until now, the veteran offensive lineman might not have ever been considered a go-to guy for quotes.

But everything’s changed now. For what might be the first time since he joined the Washington Redskins last August, Kendall has got something to say and the hometown fans should listen – when the defense is on the field, go nuts. Scream until your lungs collapse. Have at it. But when ‘Skins offense has the ball, please sit down and shut up.

“Well, I’m sure I speak for everybody,” said the 13-year NFL veteran. “We appreciate their support, but not at that particular moment. Really, it makes our job harder than it needs to be. If they could contain their enthusiasm until after we score, that would help us out.”

The fans aren’t completely at fault here. For as long as anyone remembers, an “offensive explosion” at FedEx Field constituted 15 points scored in the same day. With the ‘Skins racking up 53 points combined in their first two home games, fans are clearly in uncharted territory. So while they might mean well or think they’re helping out by chanting “Let’s Go Red-Skins!” or “Cool-Ley! Cool-Ley!” that’s not the case. (And don’t even get me started on the wave).

Anyone unsure whether the offense is enjoying the crowd’s chants needs only look to Kendall, who for two games has flapped his arms like a modern-day KoKo B. Ware in hopes of convincing confused fans to simmer down.

“Like I said, I think everyone appreciates the fans that we have here and the fact that we sell out the stadium with 90,000 people in it,” Kendall said. “Now if we could just get them to wait until after the play …”

Kendall didn’t finish the sentence, but we know what he was going to say.

Now if we could just get them to wait until after the play, then the Redskins could officially retire the following message: 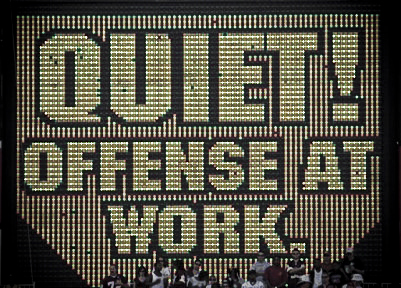