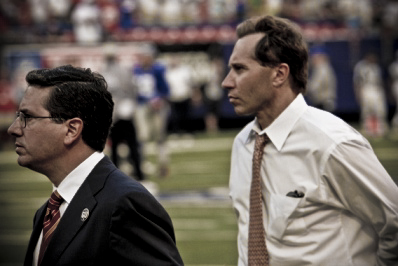 Chris Cooley’s nude study habits aside, the talk of the town this week is Vinny Cerrato, and the announcement that the Redskins’ executive vice president of football operations is ESPN 980’s newest radio host.

Starting today, Cerrato will host Inside The Red Zone With Vinny Cerrato, which is scheduled for two hours every Monday and Friday. Apparently, many folks in town feel that Cerrato, whose job description includes personnel decisions, directing the Redskins’ draft, identifying free agency needs and acquisitions, coordinating all pro and college player evaluations, and day-to-day football operations, should concentrate more on football and less on … well … anything else.

Honestly, I don’t get the big deal. ESPN columnist Bill Simmons completed a fantasy football trade on his podcast this week. How great would it be to hear Cerrato on the horn with the New York Jets or the Denver Broncos chatting about possible trade scenarios? If people are willing to listen to Clinton Portis and Brian Mitchell bicker on air, then they’d definitely tune in to hear Cerrato on the phone with player agents working out when would be best to fly in clients for the suddenly vacant punter position. There’s no real way I see this show not being a hit.

Actually, that’s not true. History shows that Washington-based general managers rarely succeed as radio hosts. Fans might not remember, but each of the other three local GMs had a short stint as a radio host, with all three shows failing to catch on in the local market. For those who don’t remember, here’s a recap:

Washington Nationals general manager Jim Bowden’s radio show never got off the ground because they refused to put any money into it. They showed up in a brand new market in the middle of the night, tried to get by on the cheap using a handful of nobodies off the street and expected a steady fanbase to appear over night. To read more about the show’s failures and terrible ratings, please read the next “kick ‘em while they’re down” piece by Dan Steinberg.

Washington Wizards general manager Ernie Grunfeld’s radio show never lasted because he continued to bring back the same mediocre cast season after season. Sure, it was offensive, but it didn’t bring much else to the table. If an angry caller ever phoned in with a negative opinion, there wasn’t anyone on the roster capable of coming to Big Ern’s defense.

Washington Capitals general manager George McPhee’s radio show failed because … um … have you heard the man? Whenever GMGM appears on the John Thompson Show they refer to him as the “Undertaker.” He might be able to put together a competent hockey team, but apparently personality costs extra. For what it’s worth, I hear his show always did well in Russia.