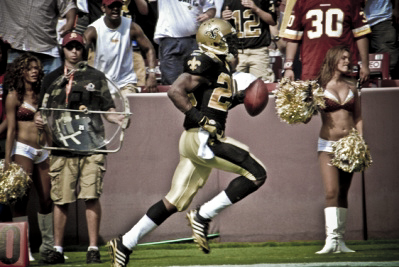 As I stood on the sidelines watching New Orleans “running back” Reggie Bush taunt a rookie punter during his return for a touchdown this past weekend, I almost felt bad for the guy.

Here’s an athlete who was seemingly on top of the world when he elected to forgo his senior season at USC. He was a Heisman Trophy winner and the biggest name on the biggest program in college football, and yet, today he’s forced to grand-stand and pose for personal accomplishments while playing on a winless underachiever.

It wasn’t supposed to be this way. At least, that’s what the overall consensus was when the 2006 NFL Draft rolled around and everyone just knew the Houston Texans were going to select Bush with the top pick. Sure, there were some rumblings that Bush and his family might have accepted gifts, cash and other illegal benefits, but so did Shaquille O’Neal, and he went on to become one of the greatest of all time. If Bush went on to accomplish half of what Shaq did, then it would have been a wise investment.

But a funny thing happened along the way – Texans general manager Charlie Casserly met with Bush and decided it was best for his franchise to go another direction. He never said why, but some suggested it was because of the salary demands by Bush and his representatives or possibly even character issues. While no one knows Casserly’s reasoning for sure, the Texans passed on Bush and selected North Carolina State defensive end Mario Williams. Bush went second to the Saints.

From there, things went from bad to worse for the Texans – with Casserly being crucified for the pick and Williams seemingly blamed for events that were out of his control, simply being drafted ahead of “Saint Reggie.” Some morons even suggested the move was one of the biggest blunders in the history of the NFL Draft.

And while Williams has gone on to have a solid career, Casserly is no longer with the Texans. He resigned as general manager and now does work as a television analyst, with the “blunder” tag still hanging over his head, even if history shows that wasn’t really the case.