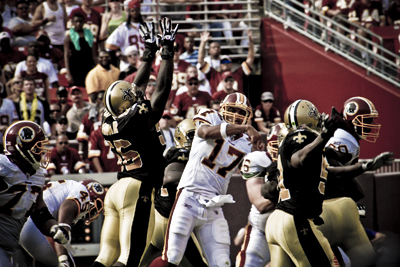 Last week was like no other for Homer McFanboy.

After attempting to take an in-depth look at the first 21 starts of Washington Redskins quarterback Jason Campbell’s career, I was called a “hater” and accused of having some sort of anti-Redskins agenda.

Even though I started off the entry by reminding folks that I’ve been called a “Campbell apologist” for years, cranky fans automatically assumed I was lobbying for a gig at the Washington Post, where negativity is always encouraged. Next thing I know, Larry Michael accused me of using unnamed sources. The Todd Collins Fan Club and “Cult Brennan” started sending me Evites to their weekly support groups. All because I had the audacity to suggest this was a make-or-break season for Campbell.

So it’s with great pleasure that I remind everyone exactly where my loyalties lie, as I gladly recount the events leading up to JC’s first step towards becoming The Franchise.

With 3:38 left to play in the game and his team trailing the New Orleans Saints 24-22, Campbell headed onto the field for what very well might have been the ‘Redskins final chance at victory Sunday.

Campbell stepped up to the Redskins 33-yard line, immediately recognized that the Saints were planning to “send the house” with a blitz and changed his pass protection at the line of scrimmage. What came next was easily the biggest play of Campbell’s young career – a 67-yard touchdown strike to speedy receiver Santana Moss, who caught the ball in stride for the game-winning score.

Anyone within earshot could easily hear Samuels’ emphasis on Campbell deserving all the credit for the play of the day. But he wasn’t alone in his praise for the fourth-year quarterback out of Auburn.

“We didn’t do that a year ago,” said center Casey Rabach of Campbell’s change at the line. “This is all new to him in the West Coast offense. For him to make that call it shows his maturity and evolution in this offense.”

While Samuels points to last week’s practice as a large reason for the offense’s preparation in this scenario, others took a broader view.

“There was a subtle thing on the play to Santana Moss, where he stepped up into the pocket,” said middle linebacker London Fletcher of Campbell. “I don’t know if many people saw it, where he was able to avoid the outside rush and buy himself some more time and hit Santana deep. That was something I saw Coach Zorn, him and the quarterbacks working on early in the offseason. It’s something you don’t realize how important it is back during OTA’s and things like that, and that was the difference in the game.”

The game-winning touchdown pass might be the most memorable, but it wasn’t Campbell’s only big play of the game, according to head coach Jim Zorn.

“I think he grew this whole week,” said Zorn of Campbell. “He just continued what he was doing from the first half into the second. He didn’t hit every throw that was there, and I was frustrated because I want him to hit 100 percent of his throws, right?”

Campbell might not have completed 100 percent of his passes against the Saints, but he did complete 24 of 36 for 321 yards. The heat index at FedEx Field was 105, and Campbell responded with a QB rating of 104.1. But most importantly, Campbell was perfect in the fourth quarter – going seven for seven for 160 yards and the previously mentioned touchdown. Here’s what Campbell had to say about the play:

“Santana was the second option on the play,” Campbell told Peter King after the game. “[Antwaan] Randle El was the first. But at the beginning of the play, I saw they had no middle safety over the top, so I knew Santana would probably be open deep if he could get a step on his guy. I knew I was running out of time and I was going to get hit, but I also knew Santana was going to get it if I laid it out for him.”

While one play during week two of the regular season doesn’t automatically launch Campbell into Joe Montana territory, it does show that the guy who was been called everything from “not smart enough” to “ill-equipped to play in the West Coast offense” shouldn’t be discarded just yet.

Sure, there will be growing pains along the way, but if everyone within the Redskins locker room is convinced Campbell’s the best man for the job, shouldn’t ‘Skins fans give him the same benefit of the doubt?