how soon they forget 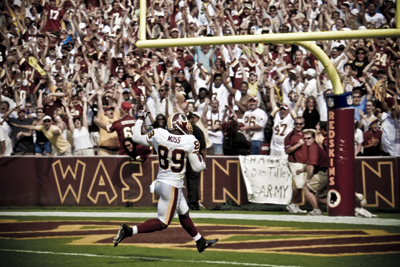 You’d be hard pressed to find another eight-year veteran as underrated as Redskins receiver Santana Moss. Even though he’s been a Pro Bowl receiver and possesses game-changing abilities, critics call him injury-prone or a one-hit wonder. Since Moss doesn’t care what the critics think, I’ll gladly speak up on his behalf and remind folks exactly what he’s brought to the table since moving to Washington.

Sept. 19, 2005 – The Redskins seemed overmatched and were outplayed for the first 56 minutes of this Monday night affair against their rivals, the Dallas Cowboys. Down 13-0 on the road with less than four minutes to play, there was little reason to think the ‘Skins would make a game out of it until Moss shocked the world. With a 39-yard touchdown and a 70-yarder just over a minute apart, the Redskins stole the game, 14-13, in what Joe Gibbs called one of the biggest wins of his Hall of Fame coaching career. Moss finished the day with five catches for 159 yards and two scores.

Dec. 24, 2005 – On Christmas Eve, plain and simply “Santana Claus” stole the show. Touchdowns of 17, 59 and 72 yards by Moss put the Redskins in the holiday spirit as they defeated the New York Giants 35-20. Moss finished the day with five catches for 160 yards and three scores.

Oct. 1, 2006 – The Redskins surprisingly find themselves in a shootout with the Jacksonville Jaguars, who came into the game with the number-one ranked defense in the NFL. Both offenses traded blows throughout and fans get the sense that whoever got the ball last would walk away victorious. Whenever the Redskins need a play they turn to Moss, who hauled in touchdowns of 55, 8 and 68 yards. The final strike, that 68-yarder, was in overtime, sending the FedEx Field faithful into a frenzy as the good guys were victorious 36-30. Moss finished the day with four catches for 138 yards and three scores.

Dec. 30, 2007 – Needing a victory to keep their slim playoff hopes alive, the Redskins once again turned to Moss against the Dallas Cowboys. While the ageless wonder known as Todd Collins was still working into a rhythm after finding himself on the field again for the first time in ages, he increased his chances for success by going to Moss early and often. The knockout punch came early in the fourth quarter when Collins and Moss connected for a 42-yard touchdown and the ‘Skins cruised to a 27-6 win. Moss finished the day with eight catches for 115 yards and a touchdown.

Sept. 14, 2008 – With a rookie head coach and an unproven quarterback, the Redskins found themselves perilously close to an 0-2 start, trailing the Saints by nine points with just over six minutes to play. Instead of panicking went to old reliable, and Moss didn’t disappoint. A 67-yard strike by Jason Campbell to Moss with 3:29 left to play in the game propelled the Redskins to their first win of the Jim Zorn Era and hushed critics for at least a day or two. Moss finished the day with seven catches for 164 yards and a touchdown.

In these five games, touchdowns were thrown by a slew of different quarterbacks – Mark Brunell, Patrick Ramsey, Todd Collins and Jason Campbell. The one constant? Santana Moss. When healthy, there isn’t much room for debate – Moss is clearly one of the elite receivers in the game.

Heading into week three, Moss finds himself fifth in the NFL in receiving yards with 201, but anyone who has ever talked with Santana knows he doesn’t concern himself with stats or personal accomplishments. Wins are what matter first and foremost to the diminutive wideout. History shows that if the Redskins continues to call Moss’ number when the game is on the line, chances are they’ll be victorious more times than not.