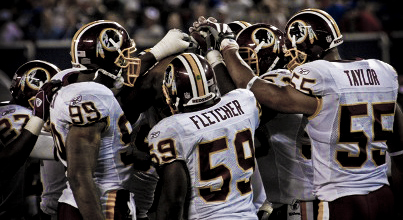 Anyone who has spent time in this town knew as soon as the Washington Redskins opened the season with a less-than-stellar 16-7 loss to the New York Giants that the sky would inevitably begin to fall.

No one cared to remember that the 2007 Redskins needed to win four straight games down the stretch just to finish with a winning record and earn a place in the playoffs. And that was a team with a Hall of Fame head coach calling the shots. This year, everything’s back to square one as a first-time coach tries to install a brand-new offense with a still unproven quarterback.

“This is a veteran team that’s made the playoffs two out of the last three years.”

No one wanted to hear that Jim Zorn hadn’t even called his own plays before, let alone been an offensive coordinator or anything resembling a head coach at any level.

“There’s too much talent on this roster to not win now.”

No one remembers that the starting quarterback, top two receivers and two key offensive linemen all missed significant chunks of time last season due to injury.

“This is the high-powered offense that Zorn and the Seahawks used to beat us twice in the playoffs.”

Well, this ain’t Madden ’09. You can’t just switch your offense from a ridiculously-conservative 700-page playbook to a precise timing-based offense with the click of a button and not expect a hiccup or two along the way. Whether anyone at Redskins Park is willing to admit it or not, they’ve basically torn everything down and are rebuilding from the ground up – especially on the offensive side of the ball.

And who was the first opponent of the Jim Zorn Era? The Super Bowl champion New York Giants.

This was the fifth time that the Super Bowl champion opened up the season with a Thursday night homer opener. In the previous four games, the champs won by an average of two touchdowns. The sellout crowd at the Meadowlands was so loud and so ridiculously passionate when they started playing a highlight package of the Giants’ 2007 post-season run you would have thought New Yorkers were watching those plays for the very first time. Celebrating three Super Bowl victories with such greats as Harry Carson, Mark Bavaro and Michael Strahan made it easy for the Giants franchise and their already-rabid fanbase to be jacked up by the time kickoff rolled around.

It wouldn’t have mattered if Tom Brady and the New England Patriots showed up for a rematch – the Giants were going to fly out of the gates and dominate whoever dared to line up against them. And if you’re a rookie coach with an offense featuring more question marks than answers? Sorry about your luck.

The Giants marched down the field and scored an easy touchdown on their opening drive to take an early 7-0 lead. Things didn’t get any better early on for the Redskins either. Three more drives, and three more scores for New York. Midway through the second quarter, the Giants had 16 points on the board and the ‘Skins had 16 yards of total offense.

“They outplayed us, there’s no way around it,” said running back Ladell Betts. “We decided to play Redskins football, so to speak, a little bit in the second half, but it was almost a little bit too late. They came out and jumped on us. They showed why they were the Super Bowl champs.”

But all was not lost in week one. The defense started slow – failing early to find a way to slow down the one-two punch of running back Brandon Jacobs and wide out Plaxico Burress – but looked better as the game went on, thanks largely to some in-game adjustments made by defensive coordinator Greg Blache.

“We settled down in the second half,” said middle linebacker London Fletcher, who leads the league after week one with 17 tackles. “We were able to really see how they were attacking us. We had great calls to defend the plays they made on us, it was just a matter of settling in and getting rid of all the first-game jitters.”

The Redskins players, to their credit, are confident that their mistake-filled debut is correctable. They believe the defense will return to the top 10 ranking they’ve had three out of the previous four seasons as players like defensive end Jason Taylor, linebacker Marcus Washington, linebacker Rocky McIntosh and defensive back Carlos Rogers all get healthy on defense. They also believe that as the season continues, the offense will show progress learning Zorn’s West Coast philosophy.

“It’s a marathon, not a sprint,” Washington said. “I definitely think we’ve got some things we can learn from. I know we’ll get better. I know the type of players we have. We’ll get better.

“This is a resilient team,” said Washington. “We’ve shown that time and time again. We’ve had our backs against the wall a lot of times since I’ve been here and we come out swinging. There’s no quitters on this team.”