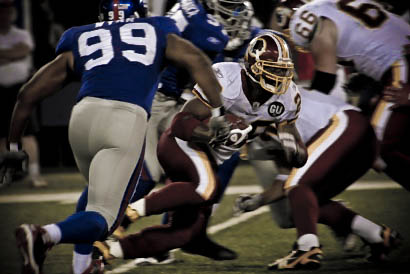 As regulars have learned by now, we do our post-game wrap-up a little bit differently. Instead of attempting to break down the X’s and O’s, we simply stick to something we know – music. With that in mind, here are five songs that sum up the Washington Redskins 16-7 season-opening loss to the New York Giants.

“If Eli Manning can put a move on you in the open field, then you know its going to be a long night.”

Moments after the game ended, a buddy and I were looking back over the Redskins’ less-than-stellar performance. We went through a laundry list of reasons why the game ended the way it did – with the Giants undefeated and the ‘Skins anything but. But even after we identified a dozen things that stuck out in our mind, nothing seemed to hit home more than the above quote. If Eli is making linebackers miss and rushing for a touchdown, then you know it’s not your night.

This game will be remembered by both teams for very different reasons. The New York Giants will fondly remember this as the night they began their quest to defend their third Super Bowl championship. The Redskins, on the other hand, will remember this as the night things went so badly that a player got hurt during the coin toss. Seriously, if you can’t make it through the coin toss injury free, then this very well might be a long season.

2. “Time Is One My Side” by The Rolling Stones.

If you’re going to continue to win over the hearts and minds of the faithful Redskins fans, then we’re going to have to ask that you show a little sense of urgency when it comes to clock management and play calling at the end of the game. Hugs,

No one would dispute that running back Clinton Portis is the Redskins biggest offensive weapon, but to continually hand it off when time is running out in the fourth quarter and you’re down by two scores is basically a sign that you’re going through the motions and ready to call it a night. Especially when the Giants are stacking eight men in the box all night long because they have no reason to respect the passing game.

Honestly, it’s impossible to know if the coaching staff had a lack of faith in the quarterback, the offensive line or both, but the play calling was uninspired all night long. It looked like those underneath patterns were there all night long, but for one reason or another, the Redskins never really took advantage.

That’s what offensive lineman Randy Thomas told me in the locker room after the 16-7 loss, when asked what the ‘Skins’ gameplan was heading into the season opener. If that was the focal point, it’s safe to say things aren’t where they want them to be. Both the offensive and defensive lines looked overmatch, getting pushed around at the point of attack on both sides of the ball. So much so that at one point in the second quarter, the Giants had 16 points while the Redskins had 16 yards of offense. While both lines seemed to improve as the game went on, especially the defensive line, there’s still enough on the game film to hurt feelings during position meetings in the coming days.

LaRon Landry, this one’s for you. I’m sure when you lined up Giants running back Brandon Jacobs you were confident that you’d put him on his backside with minimal effort. You are, after all, a guy who is never short on confidence. As we all know, that’s not exactly how things played out. You got hit with what the Madden generation would call the “truck stick,” as Jacobs rolled over you and the only thing that was missing was Chris Tucker standing over you letting you know you got knocked the … well … you know the rest.

Giants defensive end Mathias Kiwanuka is a bright guy. Like a well-versed politician, he went on the offensive as soon as the game ended – accusing Redskins tackle Chris Samuels of a dirty hit. Why? To avoid talking about getting destroyed by Clinton Portis. He got decleated, as the kids call it these days, and didn’t want anyone to bring it up and ruin an otherwise enjoyable night for him. Sorry Kiwanuka. We’re not forgetting the hit of the night, so this one’s for you.