anatomy of a big play 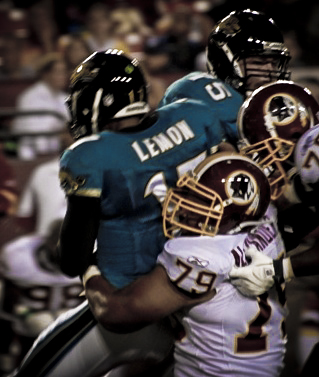 Tonight the nation’s attention will wander away from the new 90210, the latest chapter of political mudslinging or whatever other distractions are out there and return to where it should be – the NFL’s 2008 season opener featuring the Washington Redskins and the Super Bowl champion New York Giants.

This time around, names like Joe Gibbs, Michael Strahan, Gregg Williams and Jeremy Shockey are nowhere to be found, but there’s till plenty to talk about. The Giants still have a chip on their shoulder, believing that the general public still views them as a lucky team that got hot at the right time, rather than a true world champion. The strength of the Giants last season was clearly the defensive line, which featured Strahan and Osi Umenyiora. With Strahan retired and Umenyiora out for the year due to injury, people aren’t sure what to expect this time around. Will young talents like Justin Tuck be able to continue to grow and fill in the void created by the missing veterans?

For the Redskins, tonight ushers in the Jim Zorn Era. And one of the biggest names on Zorn’s roster, a guy by the name of Jason Taylor, will see limited action, if any, against the Giants as he tries to bounce back from a knee injury suffered against the Carolina Panthers. If the ‘Skins are going to be able to repeat their convincing 22-10 win over the Giants from the last time these two divisional rivals squared off, then they’re going to need to give New York a taste of it’s own medicine – a healthy pass rush against Super Bowl MVP Eli Manning (who would have thought you’d ever hear those words together?)

If Taylor is ruled out for the game or sees very limited action, then those responsibilities fall on Andre Carter and younger, less established guys like Chris Wilson and Lorenzo Alexander.

After the preseason finale against the Jaguars, I tracked down Alexander. After watching Alexander sack Jags QB Cleo Lemon with two minutes to play in the first half, I specifically wanted to ask him exactly how much work goes into getting that one big play – whether it be a sack, a forced fumble or a tackle in the backfield for a loss.

“I was trying to set him up all night,” Alexander said of the Jacksonville offensive lineman he lined up against. “Eventually, I had a good ‘get off,’ he over-stepped me, so I gave him a bump inside and the center was late to get over and help him.”

Alexander would have continued with his narrative, but Andre Carter decided to chime in.

“Tell him about the play before,” Carter said with a laugh, clearly enjoying selling out Alexander.

“Oh yeah, the play before I was chasing [Lemon] and I think the fullback came back and cleaned my clock pretty good on the sidelines,” Alexander said. “I was running at an angle towards the quarterback and he was coming from the side of me. As soon as I turned, he was right there and blew me up. That’s what happened.

[Editor’s note: the player who bested Alexander was not the fullback, but rather wide receiver D’Juan Woods, who is nearly 100 pounds lighter than Alexander. We didn’t have the heart to tell him].

“So I knew the guys, as soon as I came to the sideline, were going to give me a hard time – especially the DBs like Smoot, Springs and Carlos – so I had to make a play,” Alexander said. “When I got loose, I just exploded through and was able to make the play.”

The question then became, when Alexander did finally get to the sideline, which came first – the congratulations or the harassment?

“They did congratulate me first, but then the said, ‘But you did get smashed on the play before,’” he answered with a hearty laugh.

Who would have thought that one of the best ways to motivate a player is by pure embarrassment? Had Alexander not gotten leveled on the play before, there’s no telling if he’d have stepped up and delivered the big sack on the very next play. If that’s the case, here’s hoping Alexander and a few other defensive regulars somehow end up getting embarrassed during warm-ups and head into the game fully motivated and ready to produce.