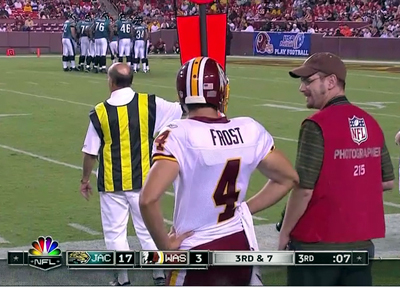 It didn’t come easy, but the Redskins made their cuts and are now down to the required 53-man roster. And unlike other towns where running backs like Rudi Johnson or quarterbacks like Joey Harrington were sent packing, the story locally was all about the punter “competition” between Derrick Frost and Durrant Brooks. Here’s an excerpt from David Elfin:

“They said the competition was even, but it definitely wasn’t,” said Frost, who averaged 45.5 yards gross and 32.3 net to Brooks’ 42.8 and 34.5. “I started the last game, and I definitely outplayed him after they said it was even going in. It was a sham. There was no competition. I think [special teams coach Danny Smith’s] hands were tied.”

That meant Frost, who is pictured above chatting with Homer McFanboy on the sidelines during last week’s Jaguars game, was suddenly looking for a new employer. It didn’t take him long to find a new home, and some would argue he’s in a much better situation now that he’s signed with the Green Bay Packers (clearly they sensed what kind of impact player Frost is, bringing in #4 as soon as Brett Favre leaves town).

After his first day on the job, Frost had a chance to talk with the Packers media and still couldn’t help but take one more little jab at the ‘Skins.

“Last year, looking back at it, I think I kicked too many balls,” said Frost. “I think I wore myself out. I’m a real hard-nosed guy and I work really hard, and sometimes I don’t work smart. This offseason, I really focused on working smarter.”

Sounds to me like Frost felt if GIbbs offense scored half as often as he had to bail them out, then he’d have been a lot fresher for his “competition” this year. Okay, I’m really reading into nothing and completely making stuff up at this point, but the truth is I’m a Frosty fan (I mean, do you see the photo of us chatting at the top of this post?) and thought he outplayed the rookie.

Do I blame the front office for keeping a punter they used a draft pick on? Of course not. But that doesn’t mean you’ll see Brooks and I being buddy-buddy on the sidelines any time soon.